Though a great deal of uncertainty remains, the storm's path has shifted westward toward the US' East Coast. 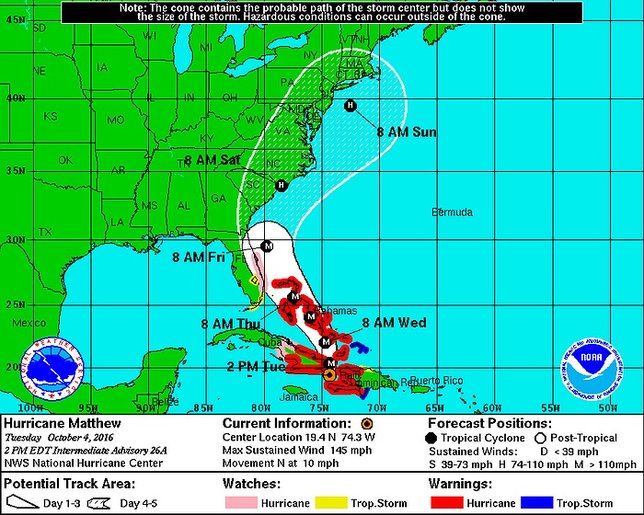 A Hurricane Watch has been instituted in Florida as Hurricane Matthew made landfall on Haiti today. The storm continues to travel northward as prediction models have shifted its track westward, potentially placing Long Island in its path.
As of 2:00 PM Tuesday afternoon the National Hurricane Center was expecting the storm to make a north-northwesterly turn Wednesday night, bringing it near the northwestern Bahamas. The storm was still a category 4 hurricane as of the early afternoon, and maximum sustained winds are expected to remain near 145 mph over the next day.
Fluctuations in intensity are possible over the next 48 hours, though Hurricane Matthew is predicted to remain a powerful hurricane at least through Wednesday.
Should Matthew progress as far North as New York, its current track puts Long Island as well as parts of Pennsylvania, New Jersey, New York, Connecticut, Rhode Island, and Massachusetts within the path of possible areas the storm's center could reach by early next week.
It is also quite possible that Matthew could head out to sea; however, it should be noted that even if the center of the storm does not make landfall in the northeast its effects could still be felt many miles away.
The National Weather Service New York stated via their Facebook page this morning that "At this time, there is still high uncertainty with this forecast. It is too soon to tell if there will be any direct or indirect impacts to the local region from Hurricane Matthew," and urged residents to continue watching the storm's progress over the coming days.
At this time the east coast of Florida remains the most immediately at-risk portion of the US, with the potential for a hit from Matthew between Thursday and Friday.
For the most up to date weather information head over to the LongIsland.com Weather Center, where you can find the latest weather forecasts, advisories and more.
Get the latest traffic & road conditions before traveling, visit the LongIsland.com Traffic Center, and check out the live traffic feeds on our Traffic Cam Page and know what traffic conditions look like before hitting the road.
[Source: NWS National Hurricane Center]