A tropical storm that will likely turn into a hurricane could rain on Long Island's parade this Fourth of July. 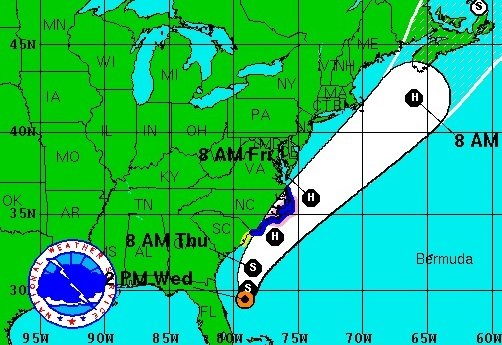 The first named storm of the Atlantic Hurricane Season has formed off the coast of Florida and is steadily making its way north. According to the National Hurricane Center, Tropical Storm Arthur will likely grow in intensity and become a Category 1 hurricane by the time it reaches North Carolina on Thursday. The storm could skim the coast and Outer Banks of North Carolina, but current models show it avoiding other states if it stays on track.

As of Wednesday morning the storm had sustained winds of 60 mph, 14 mph shy of hurricane force winds.

Even if Arthur remains a hurricane should it reach as far north as Long Island it is expected to remain at sea, sparing the region the brunt of the storm, but that does not mean LI is entirely in the clear. In addition to stirring up rip currents on the South Shore, storm clouds will extend far beyond the center of the hurricane and may dump heavy rain on the Fourth of July.

Precipitation is most likely to occur in the morning when there is a 60% chance of rain with a possibility of thunderstorms. Rain will be less likely as the day progresses, dropping to a 30% chance in the evening and further dwindling to about 20% after sunset. Skies will still be partly cloudy, but if the rain does hold off at night then conditions should still allow for local fireworks displays to continue as planned.