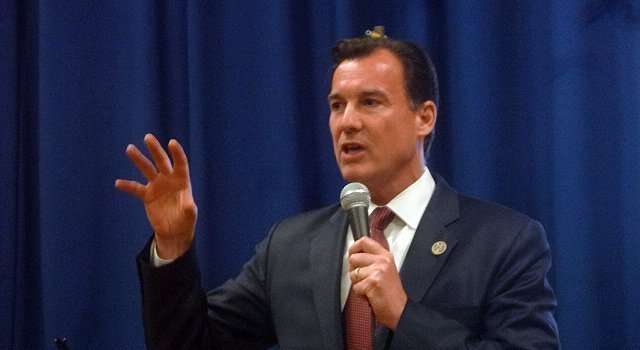 Long Island, NY - October 2, 2017 - Congressman Tom Suozzi (D – Long Island, Queens) has announced that he has joined current and former members of Congress on both sides of the aisle in signing an amicus brief urging the U.S. Supreme Court to end gerrymandering, the controversial manner by which politicians draw up districts to give their political party a distinct advantage. The brief was signed in support of plaintiffs from Wisconsin who are challenging the way that state has drawn up district boundaries.
Suozzi will attend a rally outside the Supreme Court on Tuesday, when the High Court will be hearing arguments in Gill v. Whitford, the case in question. The amicus brief can be read here.
“The biggest problem in America today is partisan division. One primary root of the partisan divide in Congress is that over 400 of the 435 seats in the House of Representatives are considered ‘safe’ seats. If you are a Republican in a Republican safe district or a Democrat in a Democratic safe district you are pretty much assured reelection, regardless of whether you’re good at your job," said Rep. Suozzi.
Suozzi added, “It gets very difficult to compromise if you are set on only pleasing your base. There is no incentive to compromise or to find common ground. The only way to ensure more competitive congressional districts is to get rid of partisan gerrymandering. I’m proud to join both Republicans and Democrats in this bipartisan push to have the Supreme Court end gerrymandering and create a system that is fair to voters.”
The Supreme Court is set to hear arguments in Gill v. Whitford on October 3rd.