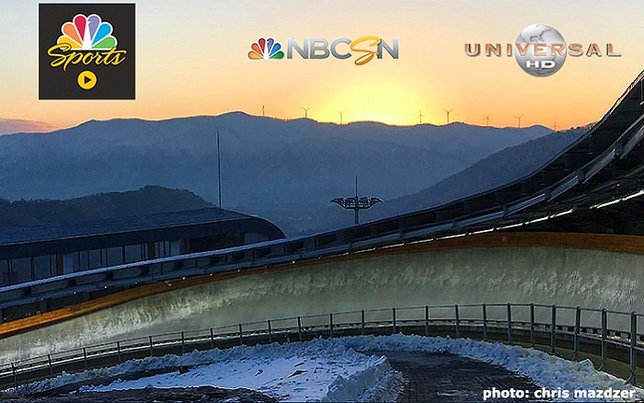 Pyeongchang, South Korea - February 16, 2017 - South Korean Olympic organizers and USA Luge hit it off immediately, when upon transporting the team from the Incheon airport to the 2018 Winter Olympic site last week, the bus driver stopped so the athletes could have lunch.

Tack on seemingly universal wifi in the mountain cluster, a diligent work ethic and a friendly approach, and these modern-day athletes are over the moon with the POCOG (Pyeongchang Organizing Committee for the Olympic Games) efforts to date.

“There’s wifi literally everywhere,” said 2014 Olympian Matt Mortensen, of Huntington Station, N.Y. during Tuesday’s media call. “There are routers in every room in our hotel. There’s wifi at the track. There’s wifi in buses to the track.”

Organizers are working diligently to not only learn their roles, but to make the world feel welcomed to this region west of the Sea of Japan. They are making extra efforts to learn name pronunciations, and for the first time in luge history, will institute walk-up music. Staff at the venue is asking for each athlete’s musical preference, which will resonate in the venue as competitors approach the start handles.

However, once the buses have arrived, the athletes have packed away their phones and the music has stopped, there is the matter of game-planning for the world’s newest track on the sport’s biggest stage.

Olympic bronze medalist and four-time World Championship medalist Erin Hamlin, said the training times to date, going back more than a week, have shown a broad range from all the nations.

“I’m just focused on getting down. I’m still figuring a lot out and trying to get consistent,” remarked the Remsen, N.Y. native. “That’s definitely in the forefront of my mind. Obviously, there’s a World Cup this weekend, so I want to do well for that and be fast. But in the bigger picture, I want to be able to get as much information and learn as much as I can to hopefully be back here next year and be comfortable.”

Mortensen’s doubles partner, Jayson Terdiman, of Berwick, Pa., has enjoyed everything about his initial visit to Pyeongchang, including Korean barbecue, watching U.S. speedskaters in action at the Olympic site and sliding at the Alpensia resort.

“This track has different sections that resemble other tracks,” stated the Sochi Olympian. “There’s a little bit of Lake Placid here, there’s a little bit of Park City, Paramonovo, too, in that the exits of some corners are pretty open. You get a different feel with also some familiarity. It’s a lot of fun and there are some tricky sections where you will see people have a lot of trouble.”

“The track is pretty challenging,” added Mortensen. “Every country has been having their own problems with the course. The Americans have been doing pretty well. We’ve adjusted to the conditions so far. The big parts to look at are curves nine and 13 where people have been having the most trouble, so going into the test event here on the weekend, I wouldn’t be surprised if we continue to see people struggle with those corners.”

Teammate Chris Mazdzer, a two-time Olympian from Saranac Lake, N.Y., has been to this Olympic venue four times over the past 18 months. He told the gathered press that, “you can tell now there’s a lot going on.”

With the Opening Ceremony slated for February 9 in South Korea (February 8 in the U.S.), the calendar is now inside 365 days until Games time. Based on the above reports, POCOG is on track to welcome the world when the lights go on.

Team USA athletes, including USA Luge, are working to match that time table.

Same day broadcast coverage is scheduled for February 18 with World Cup doubles on Universal HD from 9-10 PM ET. NBC Sports Network takes it from there with women’s singles action from 10-11 PM.

Men’s singles will be covered on February 19 at 6 PM ET on Universal HD. The show will also include highlights from the team relay.

FIL live streaming can be accessed via www.usaluge.org. Tim Singer will call the races with athlete guest analysts.