State Emergency Operations Center in Albany activated to monitor and coordinate emergency response efforts through this weekend Personnel deployed from State DEC and New York National Guard to clear debris and other barriers in roads ... 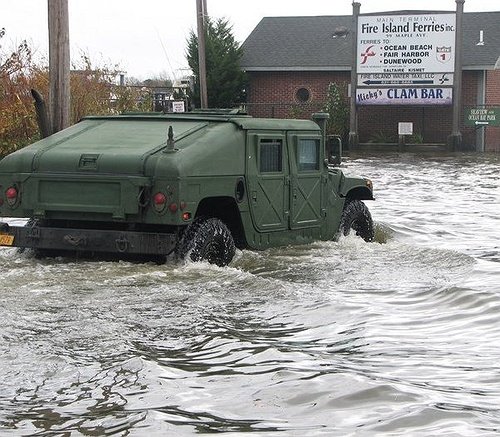 A National Guard Humvee barrels through flood waters to provide assistance to the South Shore.

Albany, NY - October 1st, 2015 - Governor Cuomo activated the State Emergency Operations Center in Albany to monitor severe weather that is anticipated to impact southern parts of New York State beginning today and potentially lasting through this weekend. This weather is expected to include heavy rain, high winds and coastal flooding as Hurricane Joaquin makes it way up the east coast. Local power outages in hard-hit areas are also anticipated.

“As Hurricane Joaquin makes its way up the East Coast, New York is in a much better position today than we have ever been before - but when it comes to Mother Nature, you can never be too prepared,” Governor Cuomo said. “That is why we are activating the State’s Emergency Operations Center and positioning critical resources across the state as we learn more about this developing storm. I urge New Yorkers to exercise caution and stay informed in the coming days.”

According to the National Hurricane Center, as of 11:00 am Hurricane Joaquin is a strong Category 3 storm. Hurricane Joaquin now has maximum sustained winds of 125 mph and maintains movement of 6 mph to the Southwest, currently located near the Bahamas. Some forecast models show Joaquin tracking close to the eastern Atlantic coastline, which would bring additional heavy rain and high winds to New York State this weekend. In addition, water levels in coastal areas are expected to rise due to strong northeast winds preceding the storm, which increase the potential for widespread, moderate flooding on Friday in downstate New York.

In advance of the storms, the New York State Office of Emergency Management has conducted several conference calls with the National Weather Service, state agency partners and counties that could be impacted by the severe weather. New York City, and Nassau and Suffolk counties activated their severe weather and coastal flood plans, and anticipate activating their Emergency Operations Centers this weekend. State OEM personnel will deploy to these locations to support local emergency response efforts.


Additionally, there are 400 additional generators available for deployment from other stockpiles in the Upstate region.

Fuel Reserves and Gas Station Generators
The State maintains a downstate strategic fuel reserve in Suffolk County that holds 2.5 million gallons of fuel that can be provided to retail customers, emergency responders and critical government entities. The State also has 2.5 million gallons of gas and diesel fuel in upstate fuel reserve terminals across the Upstate region, available to first responders. The State has 488 gas stations in the downstate region that have backup generator hook ups and a contract with an outside vendor to deploy 250 generators to these stations in the event of a large-scale power outage. Additionally, there are 40 stations downstate with generators on site currently.

Department of Environmental Conservation
The Department of Environmental Conservation today will issue an Emergency Declaration to allow debris removal to be performed in streams to protect property and public safety. The Emergency Declaration will also allow DEC and the National Guard to immediately deploy staff to critical debris removal sites around the state. DEC is working with local officials to identify potential problem areas where debris removal could help prevent flooding in the event Joaquin hits New York. Any town officials who are aware of these situations should contact DEC regional offices immediately. Towns should not straighten or trench streams as this exacerbates upstream and downstream flooding.

The State is also closely monitoring storage capacity in the Great Sacandaga Reservoir to ensure it can withstand heavy rains. The reservoir is currently 2.5 feet below normal operating levels and 12.5 feet below the spillway. Even with the recent rain 3-4 inches of rain across the watershed, the Lake only rose 6 inches, meaning the ground absorbed roughly seventy percent of the rain. At current conditions, the Lake would likely be able to absorb 10 inches (maximum prediction) of rain without a release. During Hurricanes Irene and Sandy, no water was released despite higher pre-storm water levels. DEC is working with New York City Department of Environmental Protection to ensure reservoirs in the New York City watershed have adequate capacity to handle excessive rainfall and stormwater runoff.

Metropolitan Transportation Authority
The subway system is preparing with filling sandbags, preparing and distributing generators, ensuring vehicles are fueled and ready, and preparing and scheduling staff. If the storm continues to track for New York City, the MTA can deploy covers for the 540 openings into the subway system in Lower Manhattan (vent shafts, stairs, manholes, etc.).

The MTA has also installed large sand bags at Coney Island Yard to effectively protect the yard. Short term mitigation efforts are taking place at South Ferry with the staircase closure and fiberglass vent covers, and covers are available to help protect other stations in lower Manhattan. Additionally, the seawall installed in Broad Channel will help protect the A train track to the Rockaways that washed away during Sandy.

The Long Island Rail Road and Metro-North Railroad are monitoring the forecast of the storm carefully and making preparations throughout the regions they cover. The railroads are ensuring that employees are positioned to clear fallen trees, pump out water in areas known as prone to localized flooding, address conditions caused if any power outages should occur, and operate standby diesel locomotives that are prepared at key locations to tow trains should any become disabled. The railroads are monitoring the stability of their electrical grids and substations with heightened awareness, confirming that all fuel facilities are fully stocked for adequate supply for the duration of the storm.

Port Authority
The Port Authority has 170 generators available for deployment in the downstate region, and 4 miles of barrier protection equipment to keep water away from critical transportation assets, including:


State Department of Transportation
The NYSDOT is allocating portable message boards for display Friday and through the weekend with advance storm preparation messaging. Specifically, 90 variable message boards are available in the downstate region to warn and notify drivers as needed, and 450 employees are ready to deploy as needed. Messages have been sent to secure work zones in the Hudson Valley, New York City and Long Island Regions. Crews in those regions are clearing drains, culverts and checking roadway conditions. Additional crews and emergency contractors are also on standby for response as needed.

Other resources assigned to the downstate region include:


Thruway Authority
All Thruway Divisions (New York, Albany, Syracuse, and Buffalo) are preparing for a potential mobilization on the Thruway, and all storm response equipment such as loaders, pumps, chippers, light plants, and portable VMS Boards are ready to deploy. Sites in the Hudson Valley that typically have debris issues have been checked and are clear. At the New NY Bridge, the Thruway Authority is working closely with Tappan Zee Constructors (TZC). TZC is following their adverse weather plan by securing all temporary or portable equipment, checking and adding mooring lines to marine resources, following wind protocol for cranes and other equipment using their wind meters.

Across the state, stockpiled Thruway resources include:


The Canal Corporation will continue to participate in all National Weather Service calls, monitor water levels and communicate canal operational updates through the established Notice to Mariners system. The Corporation is coordinating with hydro-electric operators, the New York Power Authority and other water management entities with respect to dams and related infrastructure to monitor current waterflows and predicted increases.

Department of Health
The State DOH will coordinate with the Greater New York Hospital Association and other health care providers to monitor their response to the storm. DOH is notifying all hospitals, nursing homes and adult care facilities to remind them to verify emergency plans and staffing plans, as well as check on stores of generators, food, and water and be prepared to implement evacuation plans for patients and staff.

The following advisories and watches have been issued by the National Weather Service in Upton:

NWS predicts minor coastal flooding through Thursday night, and moderate coastal flooding possible Friday and beyond, along with beach erosion and wash-over as a result of 5-8 foot breaking waves.