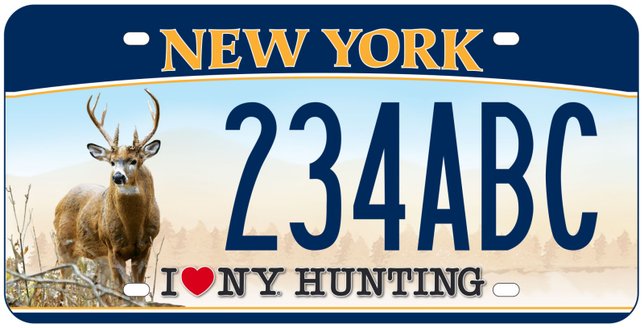 In addition, New York residents who secure lifetime licenses will have the opportunity to receive an Adventure License, which allows them the option of consolidating all their recreation licenses and benefits onto their New York State Driver’s License, an initiative first introduced by the Governor during his State of the State address last month. The Adventure License and plates are available on the state’s revamped online licensing portal: www.licensecenter.ny.gov.

To promote these latest offers, the State will launch a direct mail campaign and send one million letters to notify current short term recreational license holders. Click here for a sample letter.

“As part of our ongoing efforts to promote New York as a top destination for outdoor enthusiasts and sportsmen, we are launching the NYS Lifetime Adventure License Series that will allow New Yorkers to hunt, fish and enjoy our vast state parks for the rest of their lives,” Governor Cuomo said. “Under this program, we are creating the new Adventure License to make it easier for New Yorkers who hold these lifetime passes to travel and enjoy outdoor activities across the state, as well as new special Adventure License Plates available free to anyone who signs up for a lifetime hunting, fishing or parks license this year. With this initiative, we are growing the state’s tourism industry even further and creating jobs for communities statewide. And most of all, we are excited to offer New Yorkers and visitors the opportunity to enjoy and explore the Empire State’s great outdoors for a lifetime.”

“People who enjoy being outdoors often participate in multiple sporting activities such as hunting and fishing,” Department of Environmental Conservation Commissioner Joe Martens said. “The Adventure License allows new lifetime hunting, fishing and trapping license holders to get outside with the simplicity of bringing their driver’s license rather than multiple documents. This is just the latest example of Governor Cuomo’s commitment to making it easier for tourists and New Yorkers to recreate and enjoy the great outdoors.”

“With so much to do across our wonderful park system, the Empire Passport offers a lifetime of enjoyment that allows families and friends to build memories forever,” said Rose Harvey, Commissioner, Office of Parks, Recreation and Historical Preservation. “One investment now and the 335,000 acres, 2,000 miles of trails, beaches, nature centers and other park opportunities are yours to experience and enjoy forever. Lifetime Empire Passport members will have the option to escape alone or bring family and friends along for the experience.”

New York’s Lifetime Adventure License Series will provide many benefits for the sporting community and outdoor enthusiasts including:

To purchase a lifetime pass or to learn more about these offers, go to www.licensecenter.ny.gov.

Parks & Trails New York Executive Director Robin Dropkin said, “We New Yorkers love the outdoors. What better way to celebrate our love than purchasing lifetime passes to our spectacular parks and abundant wild places and displaying our passion for the outdoors anywhere we go with the new Outdoor Adventure License Plates. Plus, enjoying the outdoors is good for the economy—outdoor recreation contributes more than $11 billion to the state’s economy each year—and good for our health.”

Jason Kemper, Chair of the Conservation Fund Advisory Board, said, “Governor Cuomo’s increased support of sportsmen and women activities is greatly appreciated. From streamlining licenses, providing millions to increase access and complete critical repairs on our hatchery system, reducing fees, simplifying licensing documents to today’s new Adventure plates, Governor Cuomo has once again demonstrated his commitment to expanding opportunities for hunting, fishing and trapping across the state. Sportsmen activities infuse billions of dollars each year into our economy and we appreciate the Governor’s ongoing efforts to make New York a premier destination for our industry.”

Erik Kulleseid, executive director of the Alliance for New York State Parks, a program of the Open Space Institute, said, “Governor Cuomo continues to demonstrate extraordinary leadership in support of state parks. His recognition of the value of parks as recreational and cultural destinations; unique environmental classrooms; and regional economic drivers is helping to transform and uplift a once beleaguered state park system. The latest example of this commitment are the adventure license plates which offers a new way to promote visitation to parks and other state lands.”

Recreational and sporting activities generate significant economic value across New York State. According to the Congressional Sportsmen’s Foundation, sportsmen and women spent $4.95 billion on hunting and fishing in New York in 2011 and support more than 56,000 jobs across the state. In addition, spending by sportsmen and women in New York generated $623 million in state and local taxes in 2011. The New York State Office of Parks, Recreation and Historic Preservation maintains and operates 179 state parks and 35 historic sites, which are visited by 60 million people annually. A recent study commissioned by Parks & Trails New York found that New York State Parks generates $1.9 billion in economic activity annually and supports 20,000 jobs.

Photo of the new Hunting License Plate via the NYS DMV's Website.