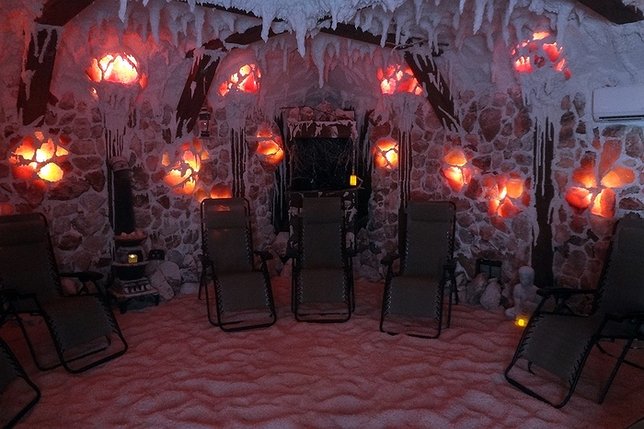 Port Washington, NY - Sept. 28, 2018 - Port Salt Cave is a fairly new business in the Port Washington community, having initially opened their doors for business the weekend after Black Friday in 2017. However, unlike many establishments in the area – old or new – the services they offer are not only unique, but can legitimately improve your quality of life in many different ways.
Port Salt Cave specializes in what is known as salt therapy; the benefits, according to owner and Port Washington resident Sue Sullivan, come from actually breathing in atomized pharmaceutical grade imported salt – via a dry salt generator – that is pumped into a very real cave located on the premises.
“It’s like using a toothbrush on your respiratory system,” she said. “Breathing in salt serves to open up your airways, moving the mucus out of your bronchioles much like a sponge.”
Sullivan noted that there are numerous health and therapeutic benefits that come along with salt therapy.
“There are elements in the salt that your body has, so there are receptor sites where magnesium goes, where potassium goes…it’s a giving salt cave. We also have iodine in our water cascades, and that's good for your thyroid,” she said. “The cave itself is very good for respiratory problems, including sinusitis, COPD, emphysema...we people coming in on oxygen, with cancer, and being in the cave helps with their stress.” 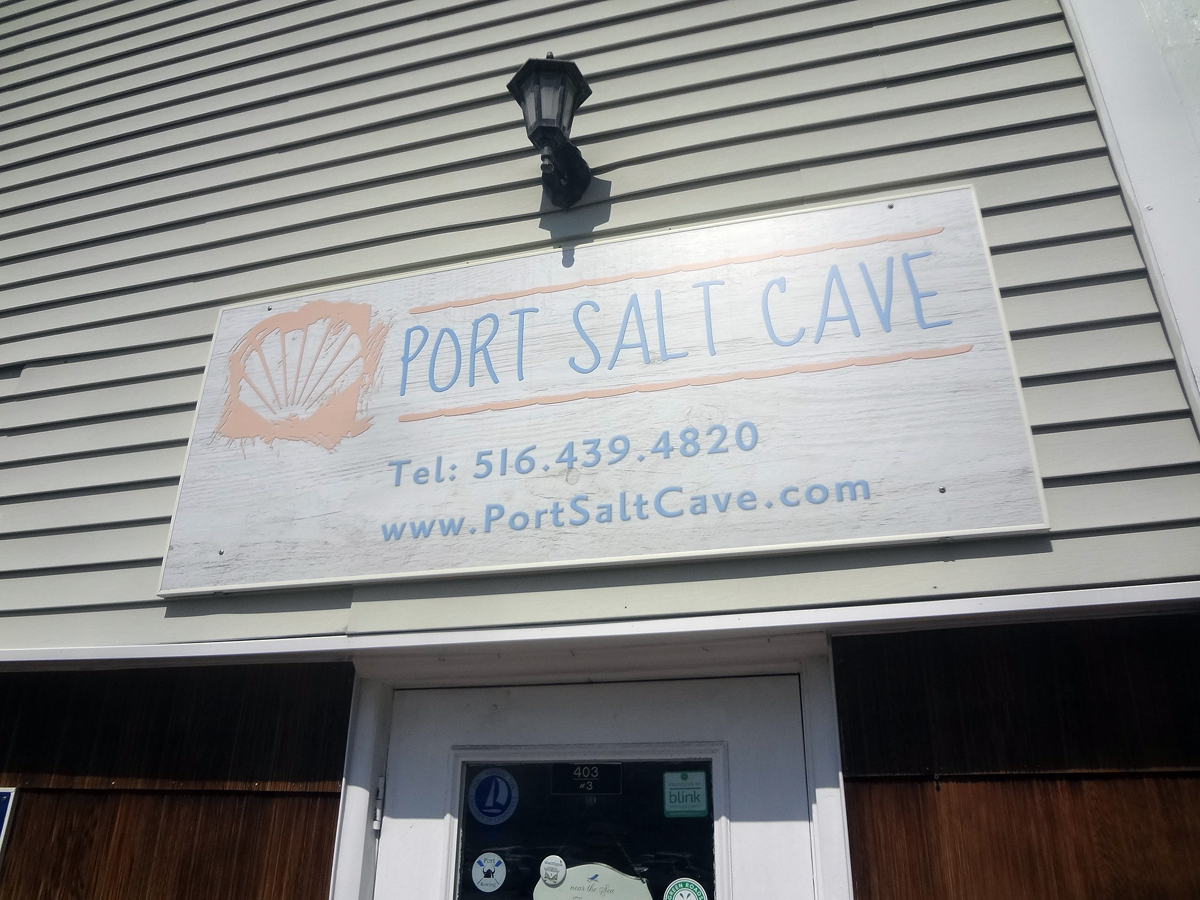 Port Salt Cave specializes in what is known as salt therapy. Photo Credit: Chris Boyle
Regular exposure to a salt cave also functions as a form of preventive medicine, Sullivan said.
“It works really great for prevention of ailments such as colds, sinusitis, allergies, and asthma,” she said. “My sister and I are both off of our allergy medications, and it's all just from working here every day. And we're not even doing sessions, we’re just in and out of the salt cave, and we don't need our meds anymore.” 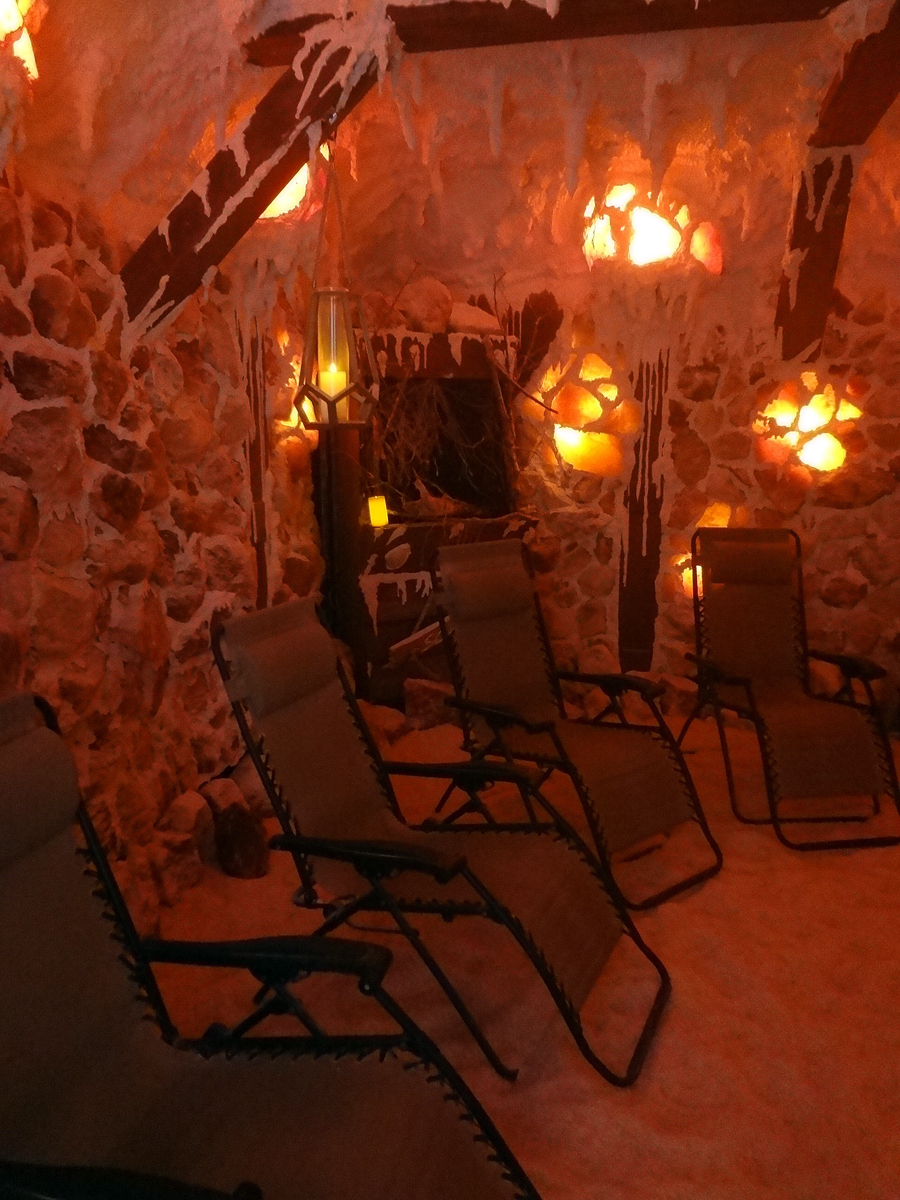 The benefits of salt therapy come from actually breathing in atomized pharmaceutical grade imported salt that is pumped into a cave located on the premises. Photo Credit: Chris Boyle
Sullivan comes from the medical and health care industry, having worked in pharmaceutical and medical device sales for 26 years. Unfortunately, she was diagnosed with breast cancer in 2014, and suffered numerous complications as she journeyed along the long road to recovery; adding insult to injury,  Sullivan’s employer let her go after having been out of work for over three years while enduring numerous surgeries, leaving her at a crossroads in her life.
“I didn't know what I was going to do...I was really panicking for a little bit,” she said.
Sullivan turned to her sister, Lori Ciotoli of Glen Head – who runs the business with her – for guidance, and it was at that time that she was introduced to the concept of salt caves, a new and fascinating method of achieving relaxation and addressing health issues through 100 percent natural means.
“A friend of mine visited a salt cave, and she was telling me what a great business it was, and I immediately thought of Sue…this is right up her alley,” Ciotoli said. “I told her about it, and I could see that she was immediately into it. And within six months, she opened up Port Salt Cave.” 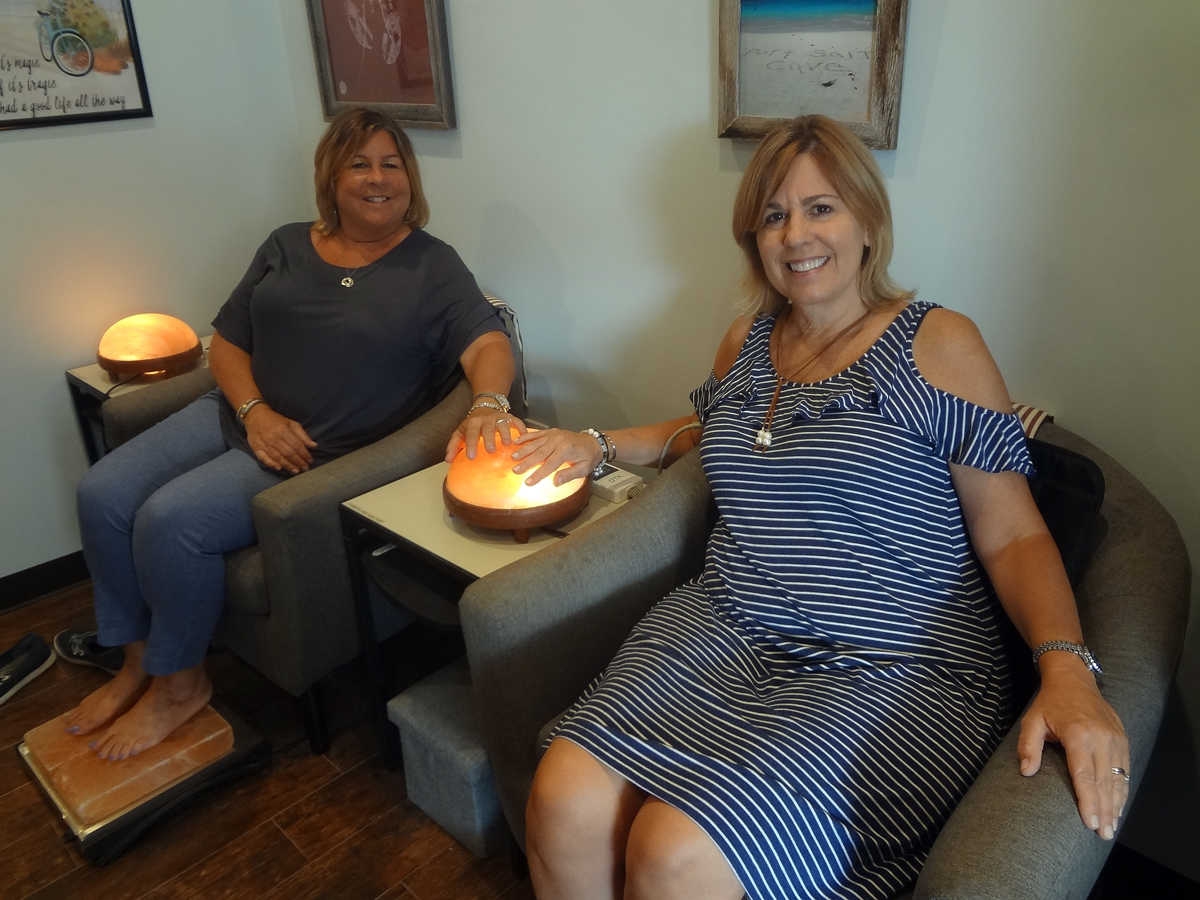 Port Salt Cave owner Sue Sullivan (left) and sister/co-worker Lori Ciotoli (right). Photo Credit: Chris Boyle
Such a swift transition between unemployment and entrepreneurship, however, does not denote a lack of know-how and effort on Sullivan's part; indeed, she dove headfirst into in-depth research on the subject, even traveling to Canada to experience the phenomenon of a legitimate salt cave first hand.
“I decided to meet with someone in Canada because I knew she would be open and honest...I didn't want to stay local because of the competition,” she said. “I drove up to Canada and met the owner and the builder who made her cave, and on the way home I said to my husband, ‘we're going to do this.’ That was in March of 2017- fast forward to November 2017, and we were open.”
Sullivan’s salt cave, upon first entering, is an otherworldly, captivating, and unique environment. Approximately 400 square feet in size and filled with approximately 22,000 pounds of salt imported from Poland, the walls are lined with large salt rocks intermittently backlit by lamps casting an atmospheric glow, and the entire floor is covered with approximately 4 inches of granulated rock salt. Faux stalactites hang from the ceiling, and the gentle, soothing sound of running water cascades casts a relaxing aura. The cave itself is dim and cool – kept at approximately 67 degrees at all times – and upon spending any length of time in the room, one will very quickly become aware of the sensation – and taste – of a salty mist upon their bodies whenever the atomizer is active. It is a truly unusual experience at first, but once you lie down and experience an introductory 45-minute session, it easily becomes one of the most relaxing and stress-reducing experiences you can imagine. 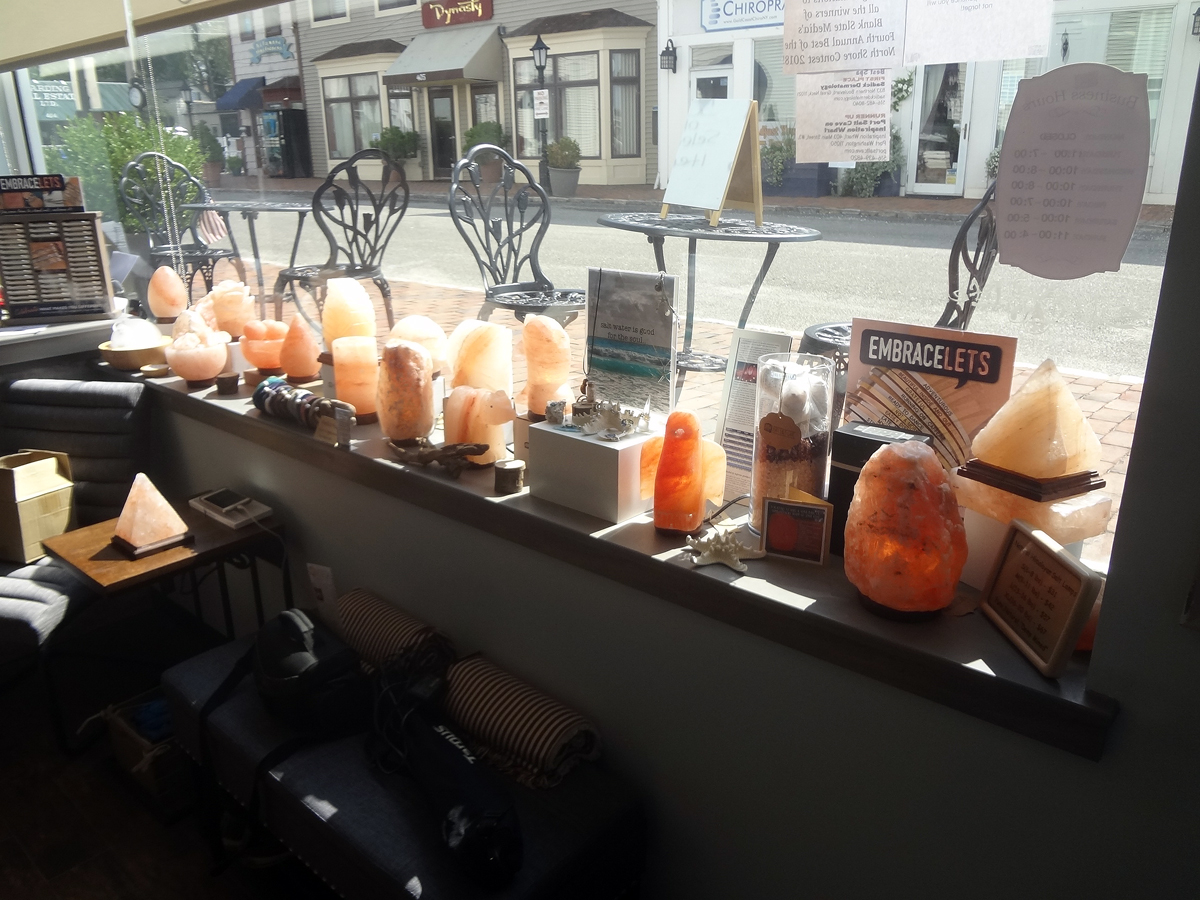 Port Salt Cave features a retail store which offers items such as rock salt lamps, hand-made jewelry, soap, and skin care products. Photo Credit: Chris Boyle
Sullivan said that salt therapy has been around for many, many years, and while it's not certain exactly when the practice was first developed, she noted that physicians conducted studies in the 1800’s upon coal and salt mine workers and the effects of their individual working environments on their overall health. The salt mine workers, it was found, were in far, far better shape than their coal mining brethren, and the coal miners enjoyed similar benefits when they were sent into the salt mines as well.
From there salt therapy was born, and the practice spread across Europe and eventually found its way over to the United States. While generally still somewhat uncommon, Port Salt Cave seeks to change that distinction and bring salt therapy to the masses in a very accessible form. 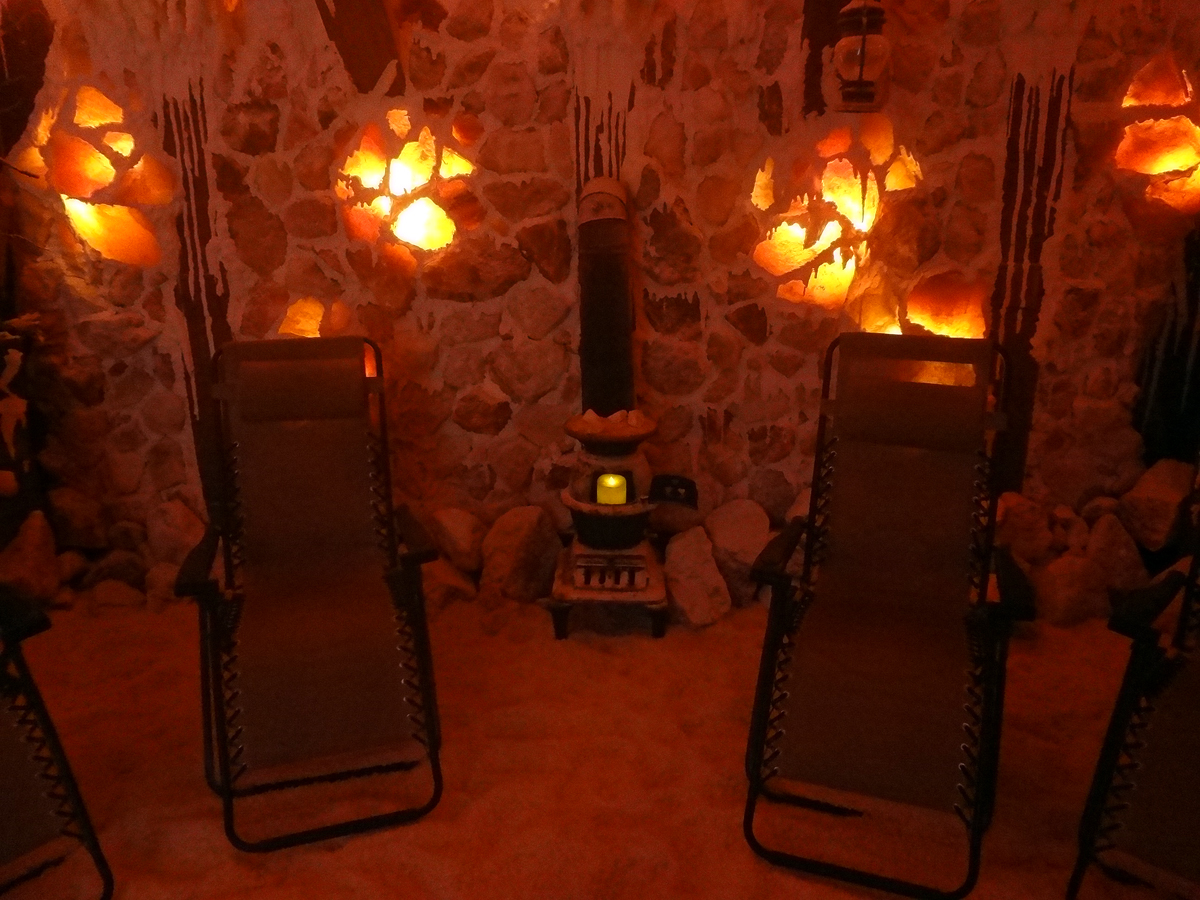 Regular exposure to a salt cave also functions as a form of preventive medicine, in addition to being a very relaxing experience as well. Photo Credit: Chris Boyle
However, Port Salt Cave isn't just about laying back and breathing in all that salt; there also numerous other activities that make use of the cave, including yoga classes, children's playtime, meditation, reiki sessions, sound healing, and much more. For a full list of the different activities and their respective schedules, please visit Port Salt Cave’s website. In addition, interested parties can actually rent the entire cave for private events if they so wish.
Ultimately though, aside from the health benefits, Sullivan noted that the salt cave is a place where people can go to get away from the rat race and embrace some peace and serenity, if only for a little while.
“What we really like is for people to just unwind and get rid of all of the electronics, and just clear your mind and try to get into a meditative state,” she said. “Because that's when you're going to feel the best when you walk out of the cave.” 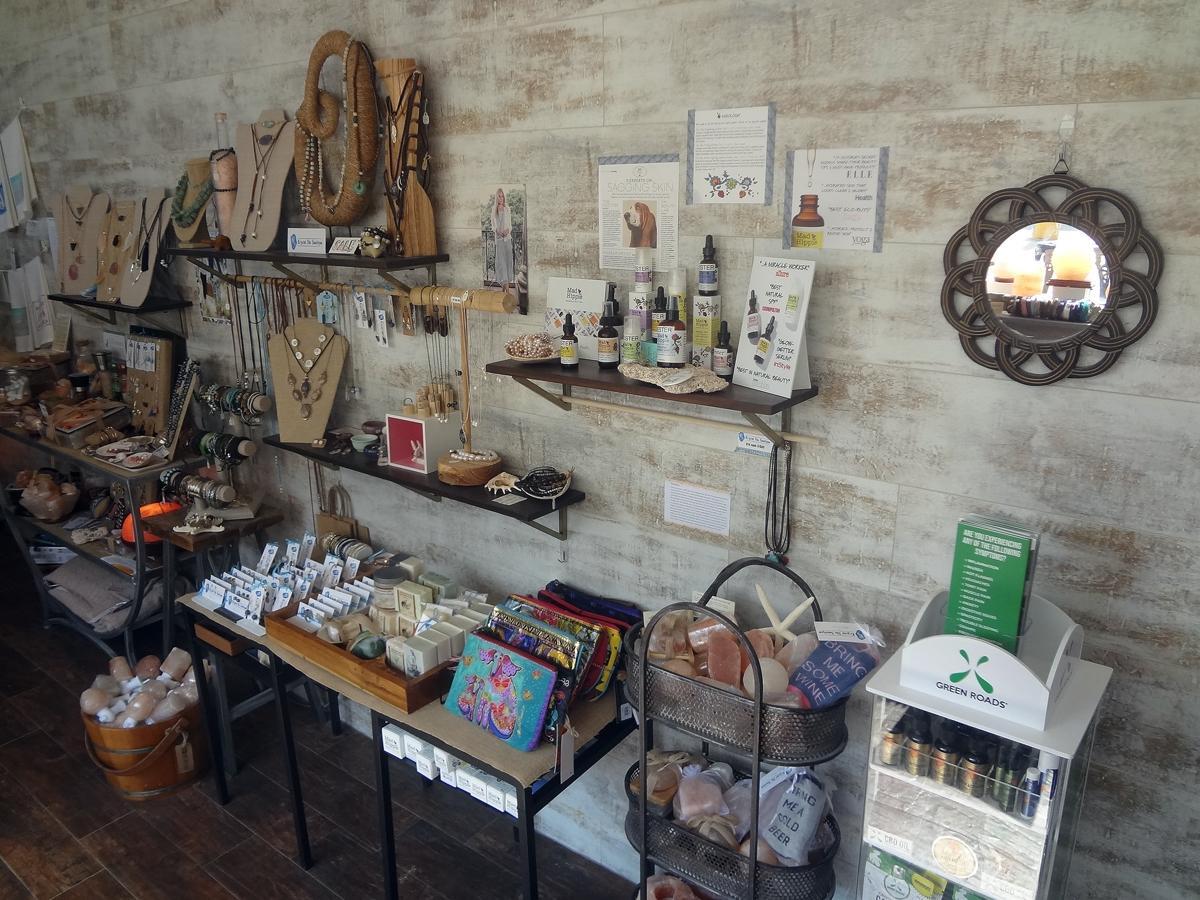 Port Salt Cave features a retail store which offers items such as rock salt lamps, hand-made jewelry, soap, and skin care products. Photo Credit: Chris Boyle
Port Salt Cave also offers numerous other amenities for its patrons, including a sauna booth as well as a small retail store, run by Sullivan’s sister, which offers numerous interesting items such as rock salt lamps, hand-made jewelry, soap and skin care products, and more.
After successfully juggling cancer and a unexpected and dramatic career shift, Sullivan noted that she's happier than she's ever been; moreover, she wants to share those good feelings, and invites everyone who's interested to come down to Port Salt Cave and experience its benefits for themselves, first-hand.
“I get to work on the water, I get to wear a t-shirt and jeans to work, and I get to help people... I just can't believe that I'm getting to live this life,” she said. “Plus I get to work with my best friend, who is my sister, and we just get to have fun. This isn't work.”
To find out more, visit Port Salt Cave’s website at www.portsaltcave.com.