Centerport Man Arrested After Breaking into 2 Businesses, Stealing a Running Vehicle and Crashing It, Then Removing Cash From a Dry Cleaners Business

The Fifth Squad reports the arrest of a Centerport man for Burglary and Grand Larceny which occurred on Saturday, July 2, 2016 at 10:13 a.m. in East Rockaway. 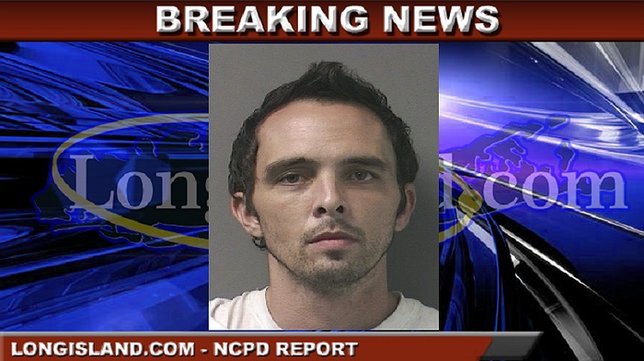 Adam Tweedie, 31, of Centerport, was placed under arrest after breaking into two businesses, stealing a running vehicle and crashing it into a light pole and striking another vehicle, fleeing on foot after the incident, and then stealing cash from a dry cleaners business.

According to detectives, on Saturday, July 2, 2016 at 6:52 a.m., Adam Tweedie, 31 of Centerport, used a cement block to break the front glass door of Chuck’s Auto located at 157 Franklin Square and entered the business. The defendant fled the location with no proceeds.

At 6:58 a.m. Tweedie slipped through an opening in a fence at Pinnacle Contracting, 252 Franklin Avenue but left without any proceeds.

A short time later at 7:05 a.m. Tweedie entered a 2014 Nissan Altima that was left running in front of 380 Franklin Avenue and fled in the vehicle. While driving southbound on Ocean Avenue, East Rockaway he struck a utility pole and collided with a northbound Ford Fusion at which time he fled the scene on foot.

At approximately 8:00 a.m. the defendant then entered Minute Man Dry Cleaners at 89 Ocean Avenue and removed cash from the register before fleeing on foot.

Tweedie was located by Fifth Precinct Officers a short time later on Main Street in East Rockaway and placed under arrest. At the time of his arrest he was in possession of the keys to the Nissan and cash from the dry cleaner. There were no injuries reported from the accident.