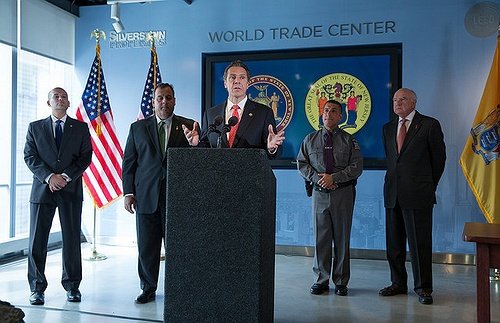 Albany, NY - September 24, 2014 - Amid new global responses to the threat of international terrorism, Governor Andrew m. Cuomo and Governor Chris Christie today adopted protocols under which New York and New Jersey will immediately begin coordinating intelligence-gathering and information-sharing to defend our residents and bi-state transit infrastructures against acts of terrorism. A Memorandum of Understanding signed by the Governors comes nine days after they held a top-level security meeting in New York with national, state and local law enforcement and security heads to begin mapping out an improved, coordinated anti-terrorism plan.

The bi-state agreement to substantially increase security at transportation hubs and critical infrastructure in the metropolitan area is effective immediately. Over the next 100 days, a surge in law enforcement and military personnel will join forces within the metropolitan area to engage in counterterrorism operations by increasing visibility, inspections and surveillance on and at trains and train stations, airports, landmarks, and bridges and tunnels. Additionally, New York and New Jersey will participate in a joint emergency exercise in the coming months and continue to evaluate methods for increased intelligence and emergency coordination.

“The New York City area has always been a top target for terrorists wishing to spread hatred and fear, and we would be in a state of denial to say that what is going on internationally has not raised that danger,” Governor Cuomo said. “That is why New York and New Jersey are increasing our level of partnership and cooperation – because public safety is paramount and joining together is the best way to defend against any possible dangers. Our residents should rest assured that we are doing everything necessary to keep the region safe.”

“Global events this week bring the threat into acutely sharp focus,” said Governor Christie.  “We know that our people and assets remain a target in the minds of depraved individuals around the globe, even in the homeland, and we are gravely committed to protecting and defending ourselves against the threat.”

Among other things outlined in the MOU:

National Guard
The National Guard's Joint Task Force – Empire Shield will surge up to two times its current strength, totaling up to 500 military personnel. The Task Force will closely and visibly work alongside the NYC Police Department Counter-Terrorism unit, AMTRAK Police, and various other city and state law enforcement agencies.

New York State Police
The New York State Police will assign dozens of State Troopers to train platforms and on the trains themselves, which has only been done sporadically in the past and never at this level. Additionally, in conjunction with the MTA Police Department, State Troopers will police the Port Washington, Hempstead, Long Beach, West Hempstead, Babylon, Montauk, Oyster Bay, Port Jefferson, Ronkonkoma, Far Rockaway and City Terminal Zone branches of the Long Island Rail Road and the Hudson and Harlem Line of the Metro-North Railroad.

The agreement also calls for New York and New Jersey to expand the operation safe guard program and commit more resources toward educating the public about “See Something Say Something.”