Portion of the proceeds will go to the ACLU. 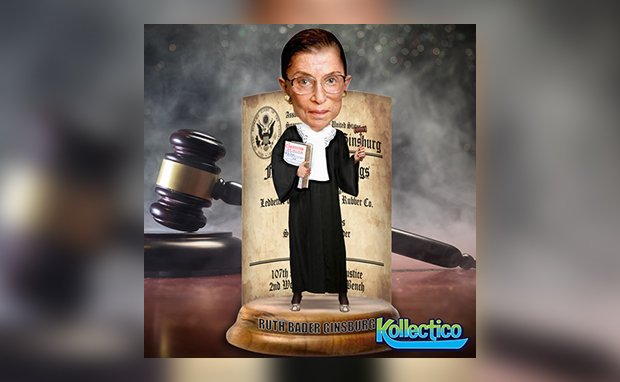 Ruth Bader Ginsburg will be immortalized by Kollectico, a Long Island company that manufactures bobbleheads, those popular statues that characterize real-life people and imaginary figures with outsized wobbly heads.

Ginsburg died on Friday, September 18 at home due to complications from metastatic pancreatic cancer. She was 87-years-old.

The company said that there will be limited run of the Ginsburg statues and a portion of the proceeds from every purchase will be donated to the American Civil Liberties Union (ACLU).

The accomplished judge sat on the highest court in the land since 1993 when she was appointed by President Bill Clinton. She was also the director of the Women's Rights Project of the American Civil Liberties Union in the 1970s. During that time she argued six landmark cases on gender equality before the U.S. Supreme Court, according to biography.com.

he bobbleheads are described by the company as 7” tall with Supreme Court Justice Ruth Bader Ginsburg in her robe of justice, holding a gavel and the U.S. Constitution. The background banner highlights several legacy cases such as U.S. v. Virginia, Ledbetter v. Goodyear and Bush v. Gore. Each bobblehead is individually numbered out of 1,993, relating to the year President Clinton nominated Ginsburg to the Supreme Court.

"The bobblehead is meant to honor the 2nd woman to sit on the highest bench for being a voice of reason for the citizens of the United State of America," said Andrew S. Hazen, Founder & CEO of Kollectico. (Hazen is also the owner of this publication.)

Hazen, who is also an attorney, said that once Ginsburg passed away he knew he had to immortalize her image through his company.

The Ruth Bader Ginsburg bobbleheads are available for pre-order at BobbleheadBoss.com, ClarkToys.com and other retailers. The collectible costs $39.95 with $5 from each sale going to the ACLU.