Senators: LI Sound Is a Vital Part of Long Island and Connecticut’s Economy, Funding Will Go A Long Way To Ensure It Remains Vibrant 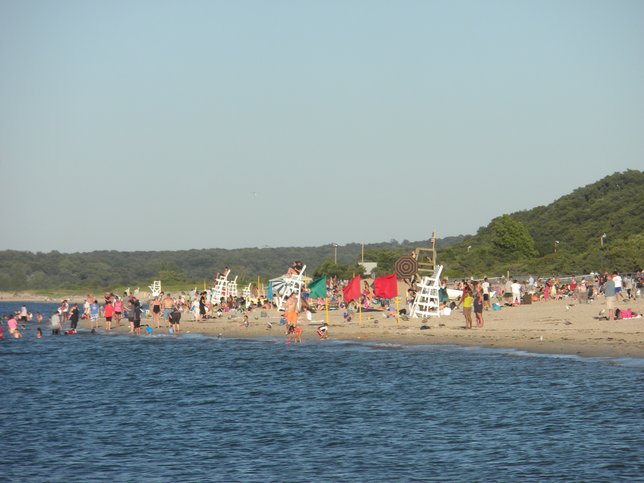 Senators Gillibrand, Schumer, Lieberman, and Blumenthal introduced legislation last year to support the restoration of Long Island Sound through 2016. The Sound borders New York and Connecticut, with 8 million people living on the coast and more than 23 million people living within 50 miles.

“We need more federal investment in the Long Island Sound,” said Senator Gillibrand. “The Long Island Sound is a natural treasure – it makes Long Island a great place to work, play, and raise a family. With more than 8 million people living within the watershed, the Sound is not only critical to Long Island’s environment and economy, but the entire regions. During these tough economic times, the Sound provides an opportunity to promote economic growth on Long Island. I am committed to taking the steps needed

“This measure helps to meet an important national obligation – protecting the Long Island Sound,” said Senator Blumenthal. “More than merely a source of natural beauty, Long Island Sound is home to a rich and diverse array of wildlife, and the foundation for hundreds of jobs in the tourism, shellfish, manufacturing, and maritime industries. Water quality and shore restoration investments are vital to preserve and protect the Sound’s pristine beauty and economic vitality for future generations.”

“Not only does Long Island Sound generate billions of dollars annually for Connecticut as a commercial and sport fishery, a recreational resource, and as a richly-productive wildlife habitat, it has defined Connecticut’s history traditions in everything from the foods we eat to the places we vacation with our families,” said Senator Murphy. “Our home here at the foot of the Sound carries with it important responsibilities, but we’ve got work to do to protect it. Federal investment is necessary to support the preservation of Long Island Sound not only for the millions of people who currently rely on it for work and recreation, but for future generations as well.”

“Funding for LI Sound is a necessity, not a luxury item.  Restoration of this magnificent estuarine system allows us to keep existing jobs that maintain our maritime culture and brings new jobs that spur our regional economy,” said Adrienne Esposito, Executive Director, Citizens Campaign for the Environment.  “The Sound is what helps make Long Island a desirable place to live and work.  As we rebuild from Sandy, let’s not forget the special places that make us want to stay here.”

In 1985, the EPA, in agreement with the States of New York and Connecticut, created the Long Island Sound Study (LISS), an office under the Environment Protection Agency (EPA) charged with advancing efforts to restore the sound and address low oxygen levels and nitrogen levels that have depleted fish and shellfish populations as well as hurt shoreline wetlands. In 1990, the Long Island Sound Improvement Act passed providing federal dollars to advance Sound cleanup projects, including wastewater treatment improvements. In 2006, identifying the need for increased stakeholder participation and the need to focus on coastal restoration and improved public access and education, Congress passed the Long Island Sound Stewardship Act which provided federal dollars for projects to restore the coastal habitat to help revitalize the wildlife population and coastal wetlands and plant life.

Full text of the Senators’ letter is below:

We are writing to urge you to fund the Environmental Protection Agency’s Long Island Sound Geographic Program at $10 million in the Fiscal Year 2014 Interior and Environment Appropriations Bill.

Federal funding to continue the Environmental Protection Agency’s program for Long Island Sound is critical to our regional economies and the quality of our environment.  The Long Island Sound is one of 28 estuaries included in the National Estuary Program, and with more than 23 million people living within 50 miles of the Sound, it is a major contributor of economic development and a source of recreation for residents and visitors alike.  According to the Long Island Sound Study, the annual economic value of the sound is approximately $8.9 billion.  The Sound is home to more than 120 species of fish, which contribute to our states’ vibrant commercial and recreational fishing industries.

In 2000 and 2006, respectively, Congress enacted the Long Island Sound Restoration Act and the Long Island Sound Stewardship Act, which together authorized $65 million annually to fund projects that improve water quality, restore and protect habitats, and increase public awareness to the issues affecting the Long Island Sound and its watershed.  This funding has allowed the federal government, working with state and local partners, as well as with the private sector, to make significant progress in improving the Sound.

For example, as of 2012, the amount of nitrogen entering the Sound from sewage treatment plants has decreased by 27 million lbs. as a result of programs funded by this appropriation.  Continuing to fund the Long Island Sound Restoration and Stewardship Acts will allow the EPA to continue to work collaboratively with local stakeholders to address water quality and invest in new strategies to reduce pollution and improve the environmental quality of the region.

Thank you for your leadership on the Appropriations Committee, and for your consideration of this request.   We look forward to continuing to work with you to ensure that Congress maintains our federal commitment to protect and restore Long Island Sound.