Partnership with American Federation of Teachers and First Book Will Provide 15 Educators from Across the State with Resources to Implement a Project Celebrating 100th Anniversary of Women's Suffrage In New York. 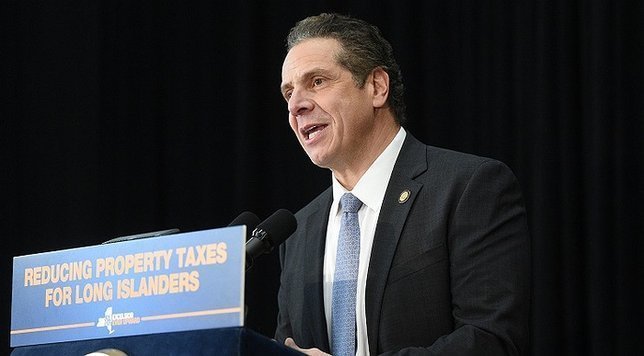 Albany, NY - September 21, 2017 - Governor Andrew M. Cuomo and Lieutenant Governor Kathy Hochul today launched the New York Women's Vote Centennial Project, a partnership with the American Federation of Teachers and First Book celebrating the 100th anniversary of women's suffrage in New York on November 6, 2017. The competition invites teachers to develop classroom projects and activities to mark the suffrage centennial. The New York State Women's Suffrage Commission will select 15 winners from across the State. Women in New York secured the right to vote in 1917, three years before the 19th amendment granted that right to women across the United States.
"New York is the proud birthplace of the women's suffrage movement, and this competition builds on our rich heritage and helps bring the lessons learned from Seneca Falls and beyond to future generations of New Yorkers," Governor Cuomo said. "I look forward to seeing the creative projects our teachers and students come up with to celebrate this historic anniversary."
Lieutenant Governor Hochul, Chair of the New York Women's Suffrage Commission, said, "New York women have always led the nation when it comes to furthering women's rights, and there is no better way to educate our young people about that history than in the classroom. The Women's Vote Centennial Project will challenge educators to create and develop classroom activities that will help our young people understand the importance of equality for all people. The goal of the project is to educate our students about the past and encourage them to use that knowledge to help create the building blocks for our future."
Projects may focus on women's history, civic engagement, the democratic process, equal rights, or a related topic. Educators and students are encouraged to explore the question: 100 years from now, when future generations look back, what will our equal rights legacy be?  Projects for any grade, K-12, will be considered.
Applications can be submitted at this link and are due by October 11, 2017.
Members of the New York State Women's Suffrage Commission will review all applications and select 15 winners, one from each region of the state and the five boroughs of New York City. Each of the 15 winners will receive $500 in books and resources to implement the project. Educators from schools serving low-income students will be able to use those credits in the First Book marketplace. Other schools will receive the materials directly from the Women's Suffrage Commission.
"Igniting young people's interest in civic engagement is vital to strengthening and defending our democracy and ensuring an economy that works for all," said AFT President Randi Weingarten.  "As Frederick Douglass said, 'Power never yields willingly,' and the activists and leaders of the suffrage movement knew that big-time. Understanding what it took for women to win the right to vote can instruct and inspire us right now, in this moment when we are fighting off threats to the right to vote, and the right to have a voice in our democracy and economy.  By teaching about the suffrage movement, we can help empower young people to act.
New York State United Teachers Executive Vice President Jolene DiBrango said, "New York -- through the union movement -- has been a national leader in advancing the women's rights movement.  In this centennial year of New York recognizing a woman's right to vote, it is essential that we continue to educate young people on women's history, advocacy and the democratic process.  We are proud to be part of this important program and thrilled to again be teaming with First Book.  This partnership means that educators will have the books and resources they need to bring this program to life."
"Understanding the women's suffrage movement, and how far we've come, is the first step toward addressing how far we still have to go," said Kyle Zimmer, president and CEO of First Book. "It's powerful to read the stories of the amazing women who championed women's rights. My hope is that with partnerships like this one, young people—girls and boys—will be inspired to dedicate themselves to advancing the cause of equal justice for all."
The New York State Women's Suffrage Commission, chaired by Lieutenant Governor Kathy Hochul, is organizing programs to commemorate women's suffrage between 2017, 100 years from when women won the right to vote in New York State, and 2020, which will be a century after the 19th Amendment was ratified. The Commission's programs celebrate the accomplishment of women's suffrage and the central role of New Yorkers and New York State in this milestone, while also helping shape the future to ensure a more just and equitable society for all. To learn more, visit www.ny.gov/suffrage.