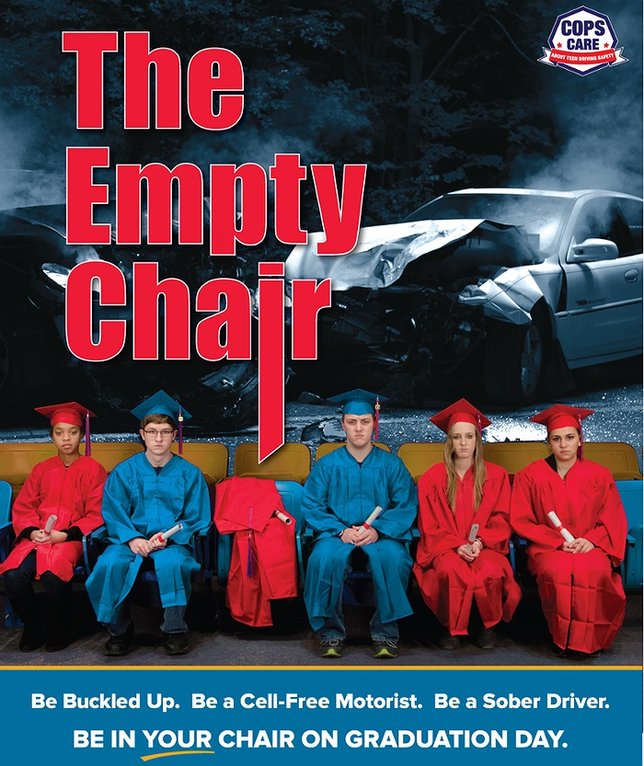 Albany, NY - April 15, 2016 - Governor Andrew M. Cuomo today launched the “No Empty Chair” teen driving safety education and enforcement campaign to raise awareness of highway dangers during prom and graduation season. State and local law enforcement will participate in the week-long, multi-agency campaign which will run from Monday, April 18 through Friday, April 22. The Governor’s Traffic Safety Committee also encourages school administrators, local traffic safety partners, and other community stakeholders to raise awareness to ensure there are no empty chairs at prom and graduation this season.

“Raising awareness about traffic safety can prevent senseless tragedies and save lives,” said Governor Cuomo. “By spreading the word about the Empty Chair Campaign, we can stop crashes before they occur, and ensure a bright future for all of New York’s students.”

The Governor’s Traffic Safety Committee kicked off this year’s campaign with an event at West Genesee High School in Camillus on April 15, which more than 100 students and several speakers, including a mother who lost her teenage son in a crash.

State and local law enforcement will increase their presence in the vicinity of local high schools throughout the campaign, and officers are encouraged to be vigilant about violations of the Graduated Driver Licensing (GDL) law, which is designed to provide time for young people to gain critical experience in various traffic scenarios. The New York State Department of Health created GTSC-funded pocket guides for law enforcement agencies and others regarding the GDL in Upstate New York, New York City, and Long Island.

The campaign will target specific infractions throughout the week, while also enforcing all other vehicle and traffic laws. The target dates are as follows:

Law enforcement agencies that have School Resource Officers (SROs) or a presence at high schools within their jurisdictions are also encouraged to conduct outreach this week and throughout the prom and graduation season. As part of the campaign, No Empty Chair posters will be displayed in high-visibility areas in schools. School administrators should contact Todd Engwer of the GTSC to request the posters free of charge by email.

Department of Motor Vehicles (DMV) Executive Deputy Commissioner and GTSC Acting Chair Terri Egan said, “Nearly every year, communities across New York State experience the tragic deaths of high school students in traffic crashes. We want to eliminate crashes, especially during prom and graduation season, and make sure every teen is in their seat on graduation day. With the ‘No Empty Chair’ campaign, we’re stepping up our efforts so that officers don’t have to make that dreaded knock on the door to parents waiting for their teens to return home. I encourage teens to avoid needless tragedies on the roads and make this a safe, healthy, and happy end of the school year.”

New York State Police Superintendent Joseph A. D’Amico said, “Our goal with this initiative is to keep teens safe so they can enjoy what is ahead of them – prom, graduation, and then moving on to the next step of their lives. Please buckle up, slow down, and put away your cell phones while driving. These few actions will make the highways safer for all and help prevent tragedy this prom season.”

This year’s No Empty Chair campaign builds on the success of last year’s initiative and works in conjunction with the Coaches Care campaign, theresult of a partnership between the GTSC and schools statewide. First announced by Governor Cuomo in October 2015, Coaches Care helps to educate teens about safe driving by encouraging coaches to openly discuss the issue with student athletes.

According to the Centers for Disease Control and Prevention, motor vehicle crashes are the leading cause of death for U.S. teens. The Institute for Traffic Safety Management and Research uncovered the following facts in New York: