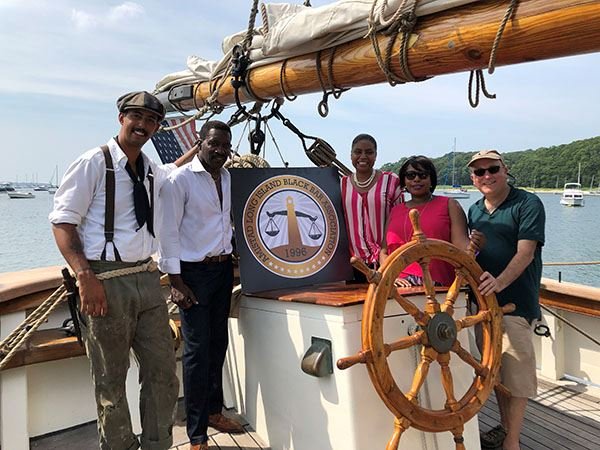 On Sunday September 1, 2019 Councilwoman Valerie M. Cartright (left photo,center), members of the Amistad Long Island Black Bar Association and many other civil rights and community leaders and members met at the Port Jefferson Harbor for a historic and educational sail on the replica "La Amistad" slave ship. Photo: Town of Brookhaven.

The La Amistad - a replica of the ship where slaves revolted against their captors leading to a Supreme Court case argued by a former president - docked in Port Jefferson at the end of the summer providing visitors an education in history, the beginnings of the fight against slavery, and the drawing of the American legal system into the fray.

Members of the Amistad Long Island Black Bar Association, an organization that promotes professional development and growth among attorneys of color in the Long Island area, Brookhaven Town Councilwoman Valerie M. Cartright, and other civil rights and community members toured "La Amistad,” a replica of the ship that was the subject of a slave revolt, while it was in Port Jefferson.

According to a statement released by the Town of Brookhaven, the original ship was the subject of 1839 slave revolt in which enslaved Africans from the Mende tribe of Sierra Leone revolted against their Spanish captors. The captives took control of the ship and directed the remaining crew to steer back to Africa, but the crew steered north, and La Amistad was captured off the coast of Long Island. Their plight was taken up to the Supreme Court where none other than John Quincy Adams was enlisted by abolitionists to argue their case for freedom. He won.

The incident was the subject of a Steven Speilberg movie titled, “Amistad” starring Djimon Hounsou.

"The events of the Amistad ship and the subsequent legal battles played a pivotal role in the United States legal system as well as on the international stage," said Councilwoman Cartright, who also served as a past President of Amistad Long Island Black Bar Association. "The ultimate determination of the freedom of the African slaves on the Amistad had a profound and lasting impact on the United States abolitionist movement."

Victoria Gumbs Moore, a co-founder of the Amistad Bar Association said the struggles for freedom and human rights by the slaves on the Amistad both on the ship and in the courtroom are still carried on by organizations like hers.

"The Amistad Long Island Black Bar Association, like the 53 Mende captives whose fight for freedom sparked an international battle about slavery more than 180 years ago, has tried to make the United States live up to the calls of liberty and equality promised by the Declaration of Independence and the U.S. Constitution," she said.

Cartright and Moore were joined by longtime Long Island civil rights activists Eugene Burnett, 90, of Wheatley Heights, and his wife Bernice, 89. Burnett said he was happy to see the number of young people actively engaged with the history of the ship.

“I was impressed with the historical information that was provided about the mindset of the slaves and slave masters at that time,” he said in a statement. “I am very happy that we are keeping our untold history alive and well with our young people."