Vehicle serves as a reminder of the sacrifice required to defend freedom and defeat the Nazi war machine, museum officials say. 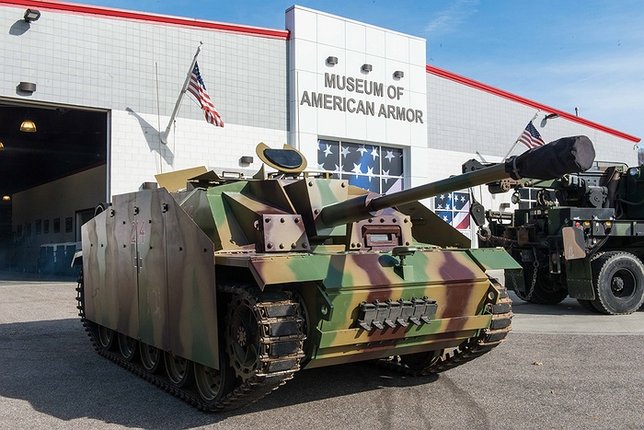 A replica Sturmgeschüz, a WW2 German assault vehicle, has been acquired by the The Museum of American Armor in Old Bethpage, NY.

Old Bethpage, NY - February 4, 2019 - Mr. Lawrence Kadish, president and founder of The Museum of American Armor, today announced the acquisition of a replica German armor vehicle designed to remind visitors and history students that America’s defense of freedom during World War II came with a heavy cost.
The replica Sturmgeschüz (or StuG) is meant to represent a German assault weapon that placed a powerful gun on a tank-like chassis. Initially intended to destroy enemy bunkers and similar defensive positions, its low profile, 75 mm cannon and mobility were put to effective use as an ambush weapon as the Allies closed in on the Nazi Reich.
A version of this weapon, the StuG III became Germany’s most produced armored fighting vehicle during World War II, with some 10,000 produced.
Mr. Kadish observed, “Its acquisition is meant to represent the deadly challenges faced by the Allies as they fought to liberate the world from the murderous scourge of Nazism. It will be periodically displayed as part of the museum’s armor experience program and award-winning educational presentations.”
Michael Sapraicone, Armor Museum board member, and founder and president of Squad Security, said, “The Armor Museum has a considerable array of Allied tanks, halftracks and artillery, allowing it to present a literal parade of American weapons. What it has not been able to do is remind the visitor just how formidable enemy defenses were, and the valor required to confront them. This vehicle allows us to reinforce the story of how we have heroes in our own families who have served, and continue to do so in the defense of our nation.”
Dr. Libby O’Connell, History Channel’s Historian Emeritus, observed, “With so little time devoted to teaching the events and lessons of World War II in our nation’s classrooms, it is easy to believe that Allied forces swept aside all opposition to end this conflict.  Not only was that not the case, but the loss of life was considerable given the military skill and fierce determination of Nazi Germany and Imperial Japan. This replica will become an important teaching tool in the months and years to come.”
The Museum of American Armor has some 40 operational military vehicles under the roof of a 25,000 square-foot facility inside Old Bethpage Village Restoration in cooperation with the Administration of Nassau County Executive Laura Curran. Opened on the 70thH anniversary of D-Day, 2014, an average of 14,000 people visit every year with special weekends set aside to observe historic military anniversaries.
The Museum of American Armor, 1303 Round Swamp Road, Old Bethpage, is inside the grounds of Old Bethpage Village Restoration and is open year around, Wednesday through Sunday, 10:00 a.m. to 4:00 p.m. Admission donations are $13 for adults, $8 for seniors and veterans and children between the ages of 5 and 12.
The museum web site is www.museumofamericanarmor.org and is also on Facebook and Instagram.