The Queen Anne’s Revenge sunk nearly three centuries ago, but was rediscovered in the mid 1990’s. 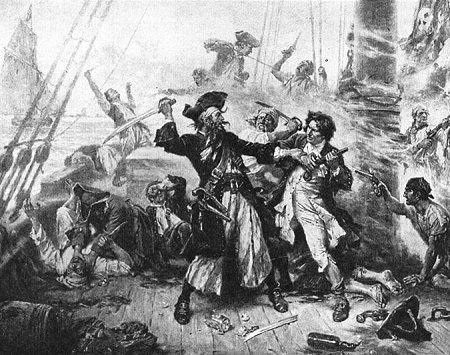 Five cannons were recovered from the Queen Anne’s Revenge off the shores of North Carolina on Monday. The craft, originally an English frigate and once used as a French slave ship, was best known for its capture and subsequent use by the pirate Edward Teach, better known as Captain Blackbeard.

Though his flagship, Teach only used Queen Anne’s Revenge for about a year before purposefully running it aground (and marooning a number of his men) as he transferred supplies and bounty onto the smaller ship, Adventure, in May of 1718. Blackbeard himself died in November of that same year in Ocracoke Inlet at the conclusion of a battle with the Royal Navy, during which he is reported to have been shot at least five times and cut an additional 20 before dying.

The famous ship was eventually discovered in 1996, and roughly 280,000 artifacts have since been excavated. Of the five cannons pulled up this week, the largest weighed about 3,000 pounds. Billy Ray Morris, director of the project, says the gun was likely made in Sweden which indicates that the ship used weapons procured from multiple countries. All of the cannons were made to fire 6-pound cannonballs at enemy boats.

Most of the items previously procured from the wreck have made their way to an exhibit in Beaufort, South Carolina, where these weapons are likely to go as well. Archaeologists will return to the site in 2014.