Organizers volunteers from her Terrace Bedell anti-drug initiative and helps build new playground to give kids a safe place to play. 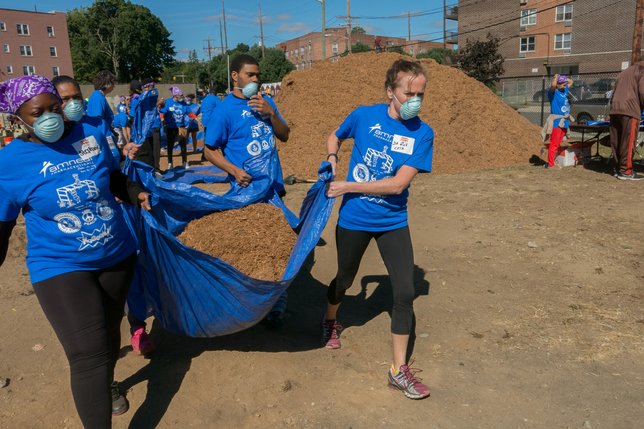 Hempstead, NY - September 16th, 2013 - In her ongoing effort to foster community-based programs to improve opportunity and safety for the residents of Hempstead, Nassau County District Attorney Kathleen Rice joined dozens of other volunteers to help build a new playground for Mirschel Park on Saturday.

For Saturday’s park building, DA Rice assembled a team of staff and members of the “Council of Thought and Action” (COTA), an organization she created in 2008 as part of her nationally recognized efforts to combat rampant crime and drugs in the Terrace Bedell section of Hempstead.  COTA has grown into a thriving community-based program in which ex-offenders, with the help of community peers and the District Attorney’s Office, are connected to resources to help them re-enter society as positive, productive citizens who eschew crime in favor of jobs, community service and mentoring.  The group continues to have twice-weekly meetings led by Assistant District Attorney Dana Boylan from DA Rice’s office.

“I want my office to help with whatever we can to make Hempstead a safer place,” said DA Rice, who helped at the Park’s mulch, planter and jungle-gym sections.  “It just brings me joy to see this beautiful playground that’s being built and to think about how far we’ve come in Hempstead over the years since we assembled COTA and first started working on the Terrace-Bedell Initiative.  We have more work to do, but a park like this is already a point of pride in the community and will give kids a sorely-needed place to play and just be kids.”

Other partners of the rebuilding of Mirschel Park include the Village of Hempstead and Mayor Wayne Hall; the Hempstead Chamber of Commerce; Amneal Pharmaceuticals; and the Washington, DC-based playground-building non-profit Kaboom.