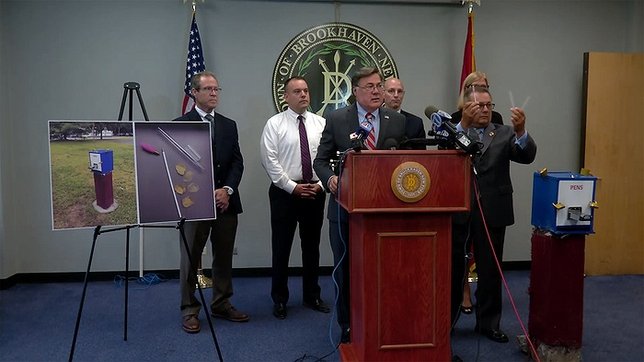 Town of Brookhaven Supervisor Ed Romaine (at podium) holding a press conference regarding crack pipe vending machines discovered on public roadways. At the right is one of the actual confiscated vending machines, deceptively labeled "PENS." Councilman Michael Loguercio (right of podium) is holding one of the crack pipes obtained from the machine.

Suffolk County, NY - Sept. 11, 2018 - Town of Brookhaven officials reported this week that three suspicious vending machines dispensing makeshift crack pipes had been discovered installed at public locations in Coram and Medford, a development that reportedly shocked local residents in those areas.
Marked with a label that read “PENS” and resembling the type of machines typically encountered in laundromats that usually dispense detergent, for two dollars in quarters a user could acquire a modified pen that was able to serve as a makeshift crack pipe, according to reports. The machines were mounted into the ground via a cement base and secured with padlocks, and police are currently attempting to found out who is responsible.
Town of Brookhaven Supervisor Ed Romaine held a press conference late yesterday, displaying one of the confiscated dispenser machines and crack pipes obtained from it, as well as photos of the original location it was discovered in. Romaine expressed disbelief that criminals could be so brazen in this day and age in promoting drug use in local communities.
“You think you've heard of everything, but I continue to be surprised by the audacity of those that would break the law in promoting drugs and drug paraphernalia,” he said. “We were informed by the community about these vending machines, and they're putting out crack pipes disguised as a pen dispenser. You put two bucks in quarters and out comes a ceramic pipe with a filter that you use to smoke crack.” 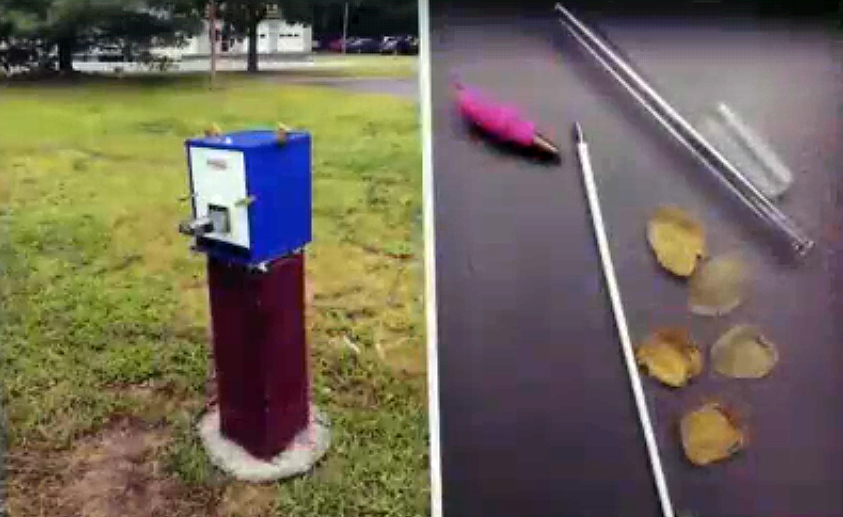 (Left) A photo of one of the crack pipe vending machines, and (right) a photo of one of the makeshift crack pipes obtained from the machine, including filters made from gauze. Photo Credit: Town of Brookhaven, Via Facebook
Two machines were located on state-owned roads, Romaine noted – one outside a Home Depot and the other by a bus stop – and Town of Brookhaven officials removed them as soon as they were informed by community members. A third, located in a privately-owned shopping center, Romaine said, would have to be removed by the center’s owner in conjunction with the Suffolk County Police Department.
“What was amazing about this is the audacity of the people who did this...they put these dispensers right on the public way,” Romaine said. “We went in and immediately removed two of them that were located on state roads, and there's a third one that is located on private property in a shopping center, and we're turning that one over to law enforcement. We need to work with the owner of the shopping center, and we’re confident that he will remove it immediately.”
Ronaine said that he will be turning over the confiscated vending machines to the Suffolk County Police Department and District Attorney Timothy Sini's office, insisting that a swift investigation will be led into the origin of these devices.
“The last time I checked, circulating drug paraphernalia is a criminal offense,” Ronaine said.
The vending machines are blue and white contraptions fasten closed with padlocks, situated atop a short column that was affixed to the ground by a cement base. It is not exactly known how long they had been in-place before authorities were informed, but common design elements among the dispensers indicated that it’s likely the same individual or individuals were responsible for all three, although this has not been confirmed as of press time.
Brookhaven Town Councilman Michael Loguercio said that the vending machines were obviously not installed with any kind of permit or any kind of site plan. A phone number located on the back of the machines was non-working, he noted.
Ronaine said that he would be working hand-in-hand with the Suffolk County Police Department in order to ensure that the perpetrators behind the illicit crack pipe dispensers are caught, and promised that that an incident such as this will not occur again in the Town of Brookhaven.
“The police will conduct an investigation in the guilty party, and that the guilty party will be brought to justice,” he said. “I don't know what they were thinking.”