"In New York, we have a long and proud tradition of fighting for union workers' rights." 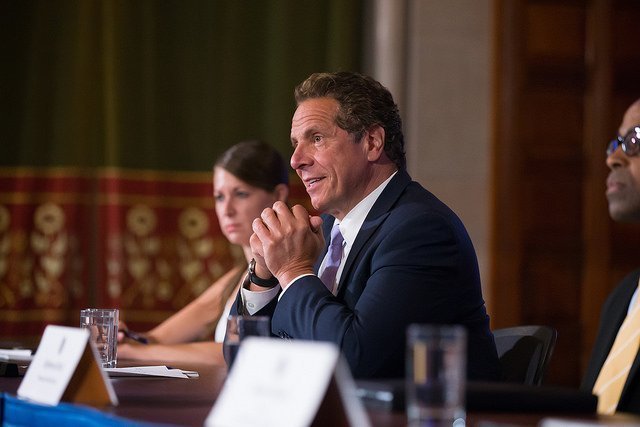 Albany, NY - September 11, 2017 - The New York Daily News published an op-ed by Governor Cuomo reaffirming New York's commitment to union workers while the federal government continues to undermine their rights. The text of the op-ed is available below and can be viewed online here.
Today as the federal government continues its efforts to compromise and undermine the rights of union workers, New York is doubling down on its commitment to protect them.
Since January, this new administration and new Congress have taken measures against organized labor, reversing decades-old policies that have benefitted millions of workers and our national economy as a whole.
In New York we understand that unions are responsible for building the middle class and creating economic growth that reaches all Americans. At a time of stagnant wages, evaporating pensions, and swelling household debt, unions continue to offer a pathway to the middle class and a means of reclaiming the American Dream.
That's why, in New York, we have a long and proud tradition of fighting for union workers' rights.
We are, after all, the state of Franklin and Eleanor Roosevelt, and New Deal Secretary of Labor Francis Perkins, who did more for the American worker than perhaps anyone else in American history.
We were the first in the nation to establish a Department of Labor in 1901, 12 years before the federal government did so. And, a little over a century ago, within months of the Triangle Shirt Waist Factory fire, we were the first state to enact laws protecting workers.
Today, under my administration, we've continued to lead the nation in standing up for unions and workers' rights.
We became the first state to pass a $15 minimum wage, a law that impacts more than 2 million workers and marks a major milestone in our efforts to restore economic justice to working families.
We fought for and passed the nation's best paid family leave law — because we refuse to force people to choose between caring for a loved one and receiving a paycheck.
And we are taking on any business that seeks to exploit its workers. In the last three years, the Joint Enforcement Task Force has recovered and returned a record-breaking $109 million in unpaid wages to 84,000 workers, sending a powerful message to exploitative businesses that they have nowhere to hide.
We are a state that promotes project labor agreements that benefit both workers and taxpayers, and we've seen big results: The Mario M. Cuomo Bridge, the expansion of the Javits Center, and LaGuardia Airport, to name a few. These agreements are vitally important as New York moves ahead with an historic $100 billion infrastructure program.
In New York we are building projects for the ages, and we need them to meet the highest possible standards: union standards.
That's why we are aggressively enforcing the prevailing wage, and will never fund a new bridge by taking money out of the pocket of the guy doing the welding. 2016 was a record year for prevailing wage schedule requests for new construction projects, with nearly 15,000 of those requests received.
As the future of our nation's labor laws hang in the balance, New York won't sit silently praying for the best but, rather, will forge ahead, setting an example for the entire nation to follow.
In our new state budget, we've done just that.
We passed our new "Affordable New York" housing program, which will not only create 2,500 new units of affordable housing per year, but will also pay the men and women building those projects a fair wage — because we believe the workers who build affordable housing ought to be able to afford to live there.
And this year we made it easier to belong to a union by passing legislation that allows union members to deduct the cost of dues from their state taxes. About 500,000 taxpayers are estimated to save $35 million a year from this deduction, or about $70 per taxpayer.
But the new legislation is more than just a financial benefit; it's also a clear demonstration of New York's commitment to defend union jobs.
In New York we celebrate you, the union worker, and we continue to fight to protect your rights — because you are the best, most tenacious and skilled workers in the world. And today, we march with you.