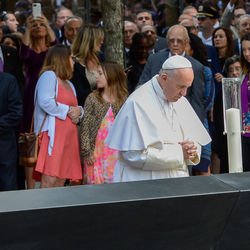 “It is an extraordinary honor to have Pope Francis in New York State, a man who embodies the values of kind-hearted acceptance, care for others, and undying hope for the future – values that are also embodied in the fabric and people of New York,” said Governor Cuomo. “On behalf of all New Yorkers, I am proud to be hosting His Holiness this week, and I wish him the most enjoyable and peaceful time as he continues to inspire us all to strive for a better world.”

The cross is encased in a wooden box bearing English and Spanish inscriptions of the final lines of Emma Lazarus’ sonnet “The New Colossus,” which is also famously mounted on a plaque inside the pedestal of the Statue of Liberty. It reads:

"Give me your tired, your poor,
Your huddled masses yearning to breathe free,
The wretched refuse of your teeming shore.
Send these, the homeless, tempest-tost to me,
I lift my lamp beside the golden door!"

Accompanying the cross is this note to His Holiness from Governor Cuomo:

“These simple, yet powerful, words grace the Statue of Liberty and represent New York State’s prayer for the world. Unbowed by the tragedy of September 11, 2001, New York remains a beacon of liberty and hope.

“On behalf of all New Yorkers, we commemorate the visit to New York by His Holiness Pope Francis, September 24-25, 2015, with this gift of a cross forged from steel salvaged from the World Trade Center’s Twin Towers.”

On Thursday, Governor Cuomo greeted Pope Francis upon his arrival in New York City and attended evening prayer at St. Patrick's Cathedral. This morning, the Governor attended Pope Francis' service at the 9/11 Museum, this afternoon visited an East Harlem School with His Holiness, and this evening will attend his mass at Madison Square Garden tonight.

The events in New York are part of Pope Francis' first-ever trip to the United States.