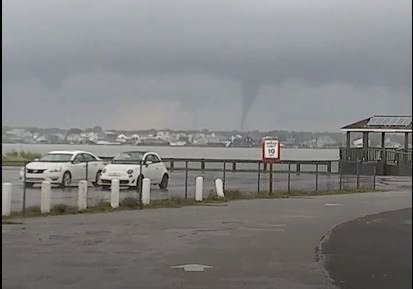 A worker at Smith Point Beach shot this video of a tornado touching down in the Manorville area on Labor Day. The video was taken from the beach area facing north toward Montauk Highway. Cheryl Landry, who recorded the video, is a cashier and salesperson at Smith Point Beach.

A statement released by the National Weather Service confirmed the tornado.

“A severe thunderstorm moving northeast over Mastic/Shirley and then into Manorville in southeast Suffolk County produced an EF0 tornado,” the statement said.

Damage from the tornado, according to the report, included sheared tree limbs and the tops of dozens of oak, maple and pine trees, uprooting of at least a dozen shallow rooted large trees and downing of several electric poles by falling trees. A shed was also reportedly destroyed as well as damage to residences in the form of sporadic blown off shingles and siding, missing storm screens, and a couple of broken windows.

“The tornado then continued northeast through a wooded area, where more tree damage was noted, before crossing the Long Island Expressway near Exit 69 while lifting. The path of tree damage and debris ended on the service road on the north side of the LIE near the intersection with Wading River Road,” the report concluded.

An EF0 tornado is considered a weak tornado with winds anywhere from 65 to 85 mph.

See below for the video.