The patriotic sacrifice and selfless courage of 9/11’s fallen heroes will be honored during the 14th annual Stephen Siller Tunnel to Towers (T2T) 5K Run & Walk in New York City on Sunday, September 27, ... 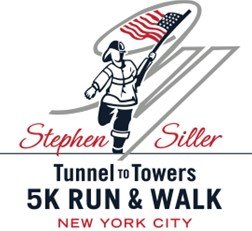 Staten Island, NY - August 31, 2015 - The patriotic sacrifice and selfless courage of 9/11’s fallen heroes will be honored during the 14th annual Stephen Siller Tunnel to Towers (T2T) 5K Run & Walk in New York City on Sunday, September 27, 2015, starting at 9:30 a.m. Participants will have the opportunity to retrace the final footsteps of Stephen Siller, the late FDNY firefighter who made the ultimate sacrifice during his heroic efforts to rescue survivors of the September 11 terrorist attack, in New York City’s most beloved 9/11 remembrance event.

The Tunnel to Towers 5K Run & Walk is open to the public. Registration is required and participants can visit www.t2trun.org for more information on how to run/walk or volunteer. Online registration will remain open until September 26 at 11:59 p.m. Participants are encouraged to create their own “T2T” fundraising page online, which allows participants to:

Participants can also register in-person the day of the run. Race day registration will take place at the IKEA parking lot in Brooklyn between 7 a.m. and 9 a.m.  Participants may purchase timing chips online only through 11:59pm on September 21, 2015.  After September 21 and through September 26, a timing chip can be obtained only if you register in person at any registration site. Timing chips are not available to those registering on race day.

More than 30,000 participants from all across the world, including as far away as England, are expected to embark upon New York City to attend the Tunnel to Towers 5K Run & Walk. Since the Stephen Siller Tunnel to Towers Foundation’s inception in 2002, this annual event and other related fundraising activities have raised more than $50 million for its various initiatives and programs, including, supporting our nation’s catastrophically injured service members through the Building for America’s Bravest program.

“Over the years. I’ve watched this Run/Walk evolve into both an annual celebration of everyone who gave their lives that day, as well as a life-affirming event for the future of this great nation,” said Frank Siller, one of Stephen’s siblings and chairman of the Foundation. “With the help of volunteers, donations and dedication, we are given the opportunity to honor Stephen and all of his firefighter brothers in the most unique way.”

The run starts at 9:30 a.m. sharp on the Brooklyn side of the Hugh L. Carey Tunnel (formerly known as the Brooklyn Battery Tunnel) in New York City. The run begins at Hamilton Avenue and Richards Street, then goes through the Tunnel, north onto West Street, left onto Liberty Street, to Battery Park Esplanade, right (east) on Warren Street, right (south) onto West Street and finishes at West and Murray Streets, across from the World Trade Center with one block as walk off area to Vesey Street.

Please note: the MTA & NYPD absolutely prohibits any backpacks, strollers, bags, water bottles and bicycles in tunnel. This will be strictly enforced. For additional details please check the FAQ page.

Although named after Stephen, the Run was created to honor the lives of the 343 firefighters who died during the September 11 terrorist attack, as well as pay special tribute to all the policemen, EMTs, construction workers and special people who lost their lives in their quest to save others.

As always, the Tunnel to Towers 5K Run & Walk is made possible by the support of literally thousands of volunteers as well as generous sponsors and supporters including Carpet One, CBS2 New York, GMC, UPS, The Home Depot Foundation, Bracewell & Giuliani, Southeast Friends of Stephen Siller, Fresh 102.7, WCBSFM 101.1, 92.3 NOW, WCBS News Radio 880, 1010 WINS, WFAN 66 AM and Semper Fi Fund, among others.