For ten days, firefighters have been struggling to slow the pace of The Rim fire in the Stanislaus National Forest near Yosemite National Park, which, according to the California Department of Forestry and Fire Protection, ... 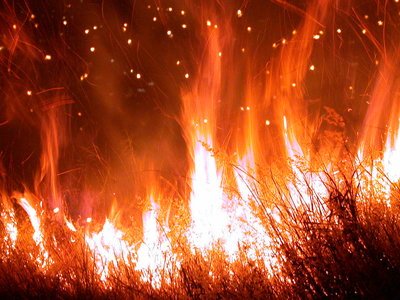 For ten days, firefighters have been struggling to slow the pace of The Rim fire in the Stanislaus National Forest near Yosemite National Park, which, according to the California Department of Forestry and Fire Protection, has burned 149,780 acres.

According to the Los Angeles Times, the blaze, one of the worst in the state’s history, is now 15 percent contained as over 2,000 firefighters continue to dig trenches, clear brush, lay heavy water hoses and set backfires in attempts to divert the fire from nearby communities, including 1,600 homes Tuolumne City.

Tuolumne City and Ponderosa Hills were under voluntary evacuation orders, and parts of Groveland were evacuated Friday.

Excessively dry conditions, combined with strong winds and inaccessible terrain continue to hinder firefighters’ efforts to contain the 234-square-mile blaze. As many as twenty-three structures have been destroyed and about 4,500 more remain at risk.

The San Francisco Public Utilities Commission had to shut down two of its three hydroelectric power stations at the Hetch Hetchy Reservoir because of the fire.

On Friday, Gov. Jerry Brown extended a state of emergency to include the county and city of San Francisco. The entrance to Yosemite National Park from California 120, the Hodgdon Meadow campground and the Hetch Hetchy backpackers’ campground remained closed Sunday.

Many air districts have issued health advisories as smoke settles over Northern California. While Yosemite Valley is clear, the Lake Tahoe basin is thick with smoke, and many outdoor activities have been canceled in Reno, Nev.

But popular areas in the park such as Yosemite Valley, Glacier Point, Wawona, Mariposa Grove, Crane Flat and Tuolumne Meadows were open.

The American Red Cross has established an evacuation center at the Mother Lode Fairgrounds in Sonora for evacuees of the Rim Fire.

Since opening on Monday, the Fairgrounds shelter has seen a steady increase in residents each day as the fire progresses. Thursday night saw a total of 102 overnight residents however, that number is expected to rise in response to Friday’s evacuations.

Individuals who would like to assist are encouraged to visit the Red Cross website to become a Red Cross volunteer. In addition, monetary donations to Red Cross Disaster Relief can be made through the site or to the Rim Fire Response by contacting the Sonora office at (209) 533-1513 or the Capital Region main office at (916) 933-7070.