Suozzi was joined at the cemetery by members from several local veteran’s groups. 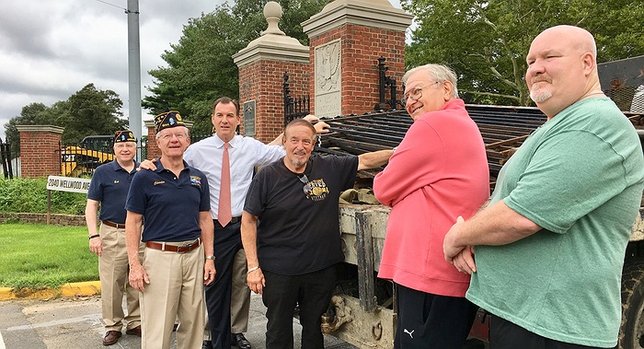 Farmingdale, NY - August 22, 2018 - On Monday, August 20, Congressman Tom Suozzi (D – Long Island, Queens) visited Long Island National Cemetery in East Farmingdale, following up on his February promise to accelerate repairs to the deteriorating fencing that surrounds the historic cemetery.
“With everything going in the world these days, sometimes things like this tend to slip through the cracks, but it really matters. I brought some attention to this at the federal level and now it is being repaired, and I am happy about it. This fence is a symbol of the respect that we have for our veterans,” said Suozzi.
Suozzi was joined at the cemetery by members from several local veteran’s groups, some of whom had called his attention to the deteriorating fence this past winter.
Years of harsh weather and automobile accidents have taken their toll on the wrought-iron fencing that was installed in 1937, at the opening of the cemetery. In addition to the repairs to the fencing, construction is also underway for a new columbarium for the interment of cremated remains. Congressman Suozzi was instrumental in securing the funding for the $9.2 million repair project.
Repairs are scheduled to be completed by April 2019.