Legislation would designate the George Washington Spy Trail on Long Island as a National Historic Trail. 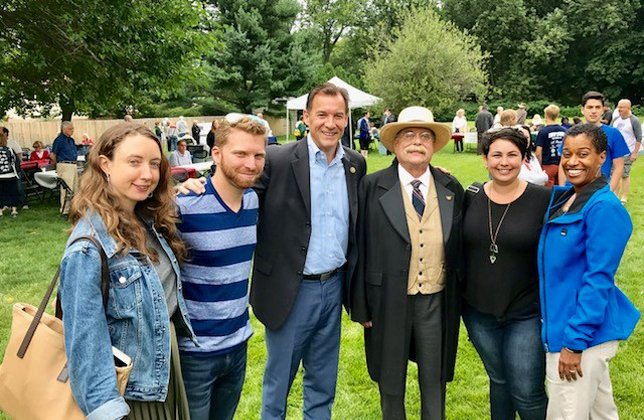 Tom Suozzi at an open house at his Huntington district office celebrating the history of New York’s Third Congressional District.

Huntington, NY - July 31, 2017 - Congressman Tom Suozzi (D – Long Island, Queens) announced that he has introduced bipartisan legislation along with Rep. Lee Zeldin (R – Long Island) that would designate the George Washington Spy Trail on Long Island as a National Historic Trail. He made the announcement at an open house in Huntington with special guest Ian Kahn, who supports the legislation and plays George Washington in the AMC hit series “TURN: Washington’s Spies.” The show chronicles the unsung heroes of the legendary Culper Spy Ring.
“New York’s Third Congressional District is home to over a dozen historic groups, museums, societies and sites. It’s incredible to think that so much of our nation’s history started right here in our community on Long Island. We need to remember the heroes who helped Washington outfox the British and bring us closer to victory and independence. The least we can do is recognize the significance of the Washington Spy Ring by making this a National Historic Trail and thereby ensuring that their sacrifices will never be forgotten,” said Congressman Suozzi.
“I very much support this great proposal recognizing the George Washington Spy Trail as a National Historic Trail, which has strong roots in New York's First Congressional District. The Culper Spy Ring played a critical role in our nation's successful fight for independence, and this proposal would ensure that the legacy of this trail, an important part of Long Island’s history, is protected and preserved. This action will also pay special tribute to the brave men and women of the Culper Spy Ring,” said Congressman Zeldin. 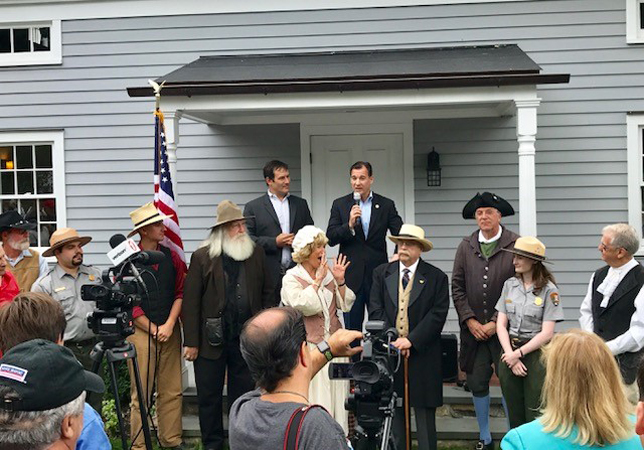 Tom Suozzi speaking at an open house at his Huntington district office celebrating the history of New York’s Third Congressional District. Photo Credit: Office of Congressman Tom Suozzi
“One of the things I’ve learned playing General George Washington, was how desperate a situation we were actually in,” said Kahn, while addressing the audience. He added, “Using a baseball analogy, it was like a college baseball team going up against the New York Yankees. It was that challenging of a situation for us as a nation. We weren’t a nation. We were a band of young brothers barreling together, going forth and trying to build something.”
Suozzi’s announcement was part of an open house at his Huntington district office celebrating the history of New York’s Third Congressional District. 12 local historic societies and museums were on hand to educate people about the Spy Trail and other facts about the region.
They included the Huntington Historical Society, Raynham Hall, Sagamore Hill National Historic Site, Old Bethpage, Village Restoration, Oyster Bay Historical Society, North Shore Historical Museum, Roslyn Landmark Society, Cold Spring Harbor Whaling Museum, Walt Whitman Birthplace, Greenlawn Historical Society, Queens Historical Society, and Floral Park Historical Society.
Representatives from the Old Bethpage Restoration Village taught broom making. The Huntington Historical Society brought impersonators of Silas Wood and his wife in period clothing. Walt Whitman and Theodore Roosevelt impersonators greeted constituents as well. Whitman was born in Huntington, while Roosevelt made his home at Sagamore Hill, which is now a national historic site.
People in attendance also learned about Raynham Hall in Oyster Bay, the home of Culper spy Robert Townsend, and got to meet a Townsend impersonator. During the Revolution, Townsend relayed intelligence concerning British troop movements, supplies and plots, using an extensive spy ring that included coded messages, invisible ink and an elaborate signal system.