The Homicide Squad is investigating a Homicide that occurred on Sunday, August 21, 2016 at 10:00 am in Uniondale. 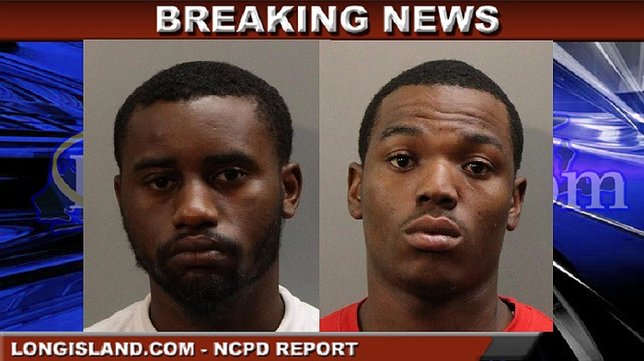 (Left) Kadeem Lyle, 22, and (Right) Jorge Burgess, 23, both of Uniondale, arrested for murder.

Update - September 16, 2016 - The Homicide Squad reports the arrest of Joshua Taylor, 24, of Uniondale for the below listed crime.  With the assistance of the Hartford City Police Department defendant Taylor was arrested on September 10, 2016 and extradited back to Nassau County on Friday, September 16, 2016.  He is charged with Murder 2nd Degree and will be arraigned on Saturday, September 17, 2016 in First District Court 99 Main Street Hempstead.

Update - August 30, 2016 - Homicide Squad reports the arrest of Kadeem Lyle, 22 of Uniondale on August 29, 2016 at 1:32 pm on Washington Avenue, Roosevelt and Jorge Burgess, 23 of Uniondale on August 30, 2016 at 12:20 am at Aqueduct Casino in Queens, NY for the below crime.  Lyle is charged with Criminal Facilitation 2nd degree and Hindering Prosecution 1st degree.  Burgess is charged with Murder 2nd degree and Criminal Possession of a Weapon 2nd degree.  Both defendants will be arraigned on Tuesday, August 30, 2016 at First District Court in Hempstead.

Update - August 22, 2016 - The victim has been identified as Jude Saint-Clair of Uniondale.

According to detectives, a 32 year old male victim was standing on the side of 926 Nassau Road when he was shot multiple times by unknown subject(s).  The victim was transported to Nassau University Medical Center where he was pronounced deceased at 10:22 am by emergency room personnel. The victims’ name is being withheld pending family notification.