Schneiderman: Making Naloxone Available to Campus Police Could Save Students’ Lives and Give Them a Second Chance 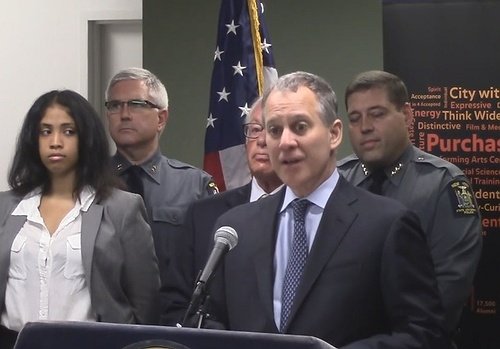 Purchase, NY - August 20, 2014 - Attorney General Eric T. Schneiderman joined Purchase College President Thomas Schwarz in announcing that 12 State University of New York (SUNY) campuses would be joining the Attorney General’s Community Overdose Prevention (COP) Program. Attorney General Schneiderman announced that his office would provide funding to equip 258 campus police officers with naloxone, the extremely effective heroin antidote that can instantly reverse the effects of an opioid or heroin overdose. The Attorney General’s COP Program uses funds seized from drug dealers and other criminals to reimburse local police departments for the cost of naloxone kits. The SUNY campuses that applied and will be receiving funding are: Purchase, Potsdam, Buffalo, Cortland, Oswego, Albany, Geneseo, Adirondack, Canton, Utica/Rome, Farmingdale, and New Paltz.
“The COP Program is an essential part of our effort to combat the epidemic of heroin overdoses plaguing communities here in New York State and across the country,” said Attorney General Schneiderman. “In just the past year, we’ve seen multiple students overdose on SUNY campuses—a tragic reminder that the crisis we’ve seen in the news is not so far from our students’ dorm rooms. By providing SUNY campus officers with naloxone, we are making this stunningly effective overdose antidote available to institutions that educate and care for our students.”
The COP program will provide SUNY Police with almost $27,000 to purchase 258 naloxone kits for the SUNY campuses at Purchase, Potsdam, Buffalo, Cortland, Oswego, Albany, Geneseo, Adirondack, Canton, Utica/Rome, Farmingdale, and New Paltz. That means nearly half of SUNY’s sworn officers will have access to naloxone. Since the COP Program was launched on April 3rd, more than 200 law-enforcement agencies have applied to the COP Program. Several dozen more are completing the necessary steps to become eligible. The COP Program has now approved the distribution of nearly 28,000 kits to 164 police departments across the state.
In 2012, Westchester was among the top 10 counties in the state for opioid-related hospitalizations. The Hudson Valley had the highest per capita heroin hospital admission rate in the state in 2012, with an average of 1.912 opioid-related admissions per 1,000 residents.
In May, a SUNY Oswego student died on campus from a heroin overdose and two suffered near-fatal overdoses off campus. In April, an Oswego student died in his home off campus from a heroin overdose. Last year, a graduate student died from a heroin overdose on campus at Binghamton.
Each naloxone kit consists of a zip bag or pouch containing two prefilled syringes of naloxone,  two atomizers for nasal administration, sterile gloves and a booklet on the use of the drug. The cost of a naloxone kit is approximately $60, and the shelf life of each kit is approximately two years.
The success of naloxone in combatting opioid overdoses cannot be overstated. Since the fall of 2010, the police department of Quincy, Massachusetts, the first department in the nation to require its officers to carry naloxone, has used the drug 221 times and successfully reversed 211 overdoses (as of February), a success rate of over 95%. In New York’s Suffolk County, State Police saved more than 170 people.
Purchase College President Thomas J. Schwarz said, “The Community Overdose Prevention program is a powerful weapon in battling heroin and prescription pain pill abuse and the tragic deaths that result. With the heroin antidote, first responders have been able to prevent thousands of deaths each year around the country—saving individuals, families, and communities from devastation. Providing that proven life-saver to our police will have a profound impact throughout the state of New York, as well as in our local communities.”
Michael Bailey, Chief of Police at Purchase College, said, “Very often, governmental initiatives don’t come with the funding to back them up. But in the case of the Community Overdose Prevention Program, Attorney General Schneiderman is providing funds to purchase naloxone not only for the NYS University Police, but for many law enforcement agencies across the state. That money will no doubt help us protect a particularly vulnerable population throughout our university system, even saving the lives of some students who either made a poor decision or who are gripped by the disease of drug addiction.”
Since taking office, Attorney General Schneiderman has been aggressive in combatting the scourge of heroin in New York. He led the effort to rein in prescription opioid abuse by passing unanimous legislation to create I-STOP – the Internet System for Tracking Over-Prescribing. Initial figures indicate that I-STOP has reduced doctor-shopping – the practice of going from doctor to doctor to accumulate prescriptions – by 75% in just the first year. On the criminal side, I-STOP has led to the prosecution of several doctors who willingly participate in doctor-shopping. Separately, the Attorney General’s Organized Crime Task Force has successfully dismantled a number of heroin rings around the state.