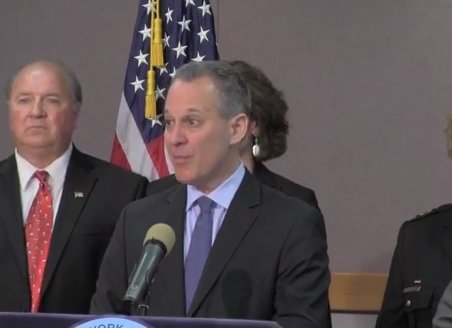 Albany, NY - May 7, 2014 - Attorney General Eric T. Schneiderman announced today that the first round of awards for the Community Overdose Prevention (COP) Program will provide 39 law-enforcement agencies across the state with funds to equip their officers with Naloxone and train them to use the life-saving heroin antidote. This initial round of awards gives reimbursements to departments in nearly 30 different counties for the purchase of over 1,073 Naloxone kits. Since the launch of the program five weeks ago, 100 law-enforcement agencies have applied for almost 3,300 kits.
Additionally, Attorney General Schneiderman announced that the Guilderland Police Department has become the first department to receive a full reimbursement through the COP Program. The department has already purchased enough Naloxone to equip and train its 35 officers and has received $2,100 in reimbursement funds.
“Since we launched the COP Program five weeks ago, the response across our state has been overwhelmingly positive—but also a sober reminder of how serious the heroin epidemic has become,” said Attorney General Schneiderman. “Naloxone is stunningly effective at stopping an overdose in its tracks, and now 100 law enforcement agencies are on their way to putting it in the hands of their officers. I have no doubt that we’ll continue to receive a steady stream of applications as heroin continues to plague communities in New York and around the country.”
Launched on April 3, 2014, the COP Program uses criminal and civil forfeiture money to equip and train every state and local officer in New York with naloxone, also known by the brand name Narcan, the extremely effective heroin antidote that can instantly reverse the effects of an opioid overdose. Each kit consists of a zip bag or pouch containing two prefilled syringes of naloxone, two atomizers for nasal administration, sterile gloves and a booklet on the use of the drug. The cost of a naloxone kit is approximately $60, and the shelf life of each kit is approximately two years.
The success of naloxone in combatting opioid overdoses cannot be overstated. Since the fall of 2010, the police department of Quincy, Massachusetts, the first department in the nation to require its officers to carry naloxone, has used the drug 221 times and successfully reversed 211 overdoses (as of February), a success rate of over 95%. In New York’s Suffolk County, 563 lives were saved last year alone in a pilot program.
Albany County Executive Daniel P. McCoy said, “With the use of heroin and opioid overdoses on the rise, I can’t thank Attorney General Eric Schneiderman enough for making funds available from the Community Overdose Prevention Program for agencies to buy kits that will save lives. In the last 16 months here in Guilderland, there have been 26 heroin overdoses… seven of them deadly. Having the antidote on hand could and will save lives.”
State Senator Cecilia Tkaczyk said, "Heroin abuse is reaching epidemic proportions all across the state, even in our small towns and rural villages. I recently held a public forum on the crisis, and have spoken to many law enforcement officials, all of whom support increasing the availability of Naloxone for our first responders. The Attorney General's new program will help save lives; and by funding the program with seized criminal assets, it will not impose a cost on taxpayers. I thank him for his thoughtful leadership on this important issue."
Assemblymember Patricia Fahy said, "The increasing prevalence of illegal substances such as heroin in our neighborhoods and communities is nothing short and devastating to their users and their families. With Attorney General Schneiderman's leadership on this issue, police departments such as Guilderland's are now better prepared to combat heroin use through COP funding.”
Chief of Police Carol J. Lawlor, Town of Guilderland Police Department, said, "With the increased number of opiate overdoses and deaths as a result, the ability for our police officers to carry Narcan and to intervene quickly will increase the probability of saving a person's life. On behalf of the residents and visitors of the Town of Guilderland, I would like to thank the Attorney General for providing the funding for this life-saving program."
Guilderland Town Supervisor Ken Runion said, “We are sincerely grateful to Attorney General Eric Schneiderman for the funding he is providing to the Guilderland Police Department so that our officers will be carrying the lifesaving drug Naloxon. The Town of Guilderland is not exempt from the tragic heroin epidemic. Narcan has repeatedly proven to be successful in reversing the effects of a heroin overdose, saving lives and heartbreak.”
Since taking office, Attorney General Schneiderman has been extremely aggressive in combatting the scourge of heroin in New York. He led the effort to rein in prescription opioid abuse by passing unanimous legislation to create I-STOP – the Internet System for Tracking Over-Prescribing. Initial figures indicate that I-STOP has reduced doctor-shopping – the practice of going from doctor to doctor to accumulate prescriptions – by 75% in just the first year. On the criminal side, I-STOP has led to the prosecution of several doctors who willingly participated in doctor-shopping.
Separately, the Attorney General’s Organized Crime Task Force has successfully dismantled a number of heroin rings around the state. Most recently, OCTF secured nine convictions related to its takedown of a home-grown, Albany-based street gang called the Original Gangsta Killas.
Image and Video via AG Schneiderman's Official YouTube Page