The woman is in stable condition after being hit in a parking lot; a man attempted a burglary in Roosevelt using a pitchfork. 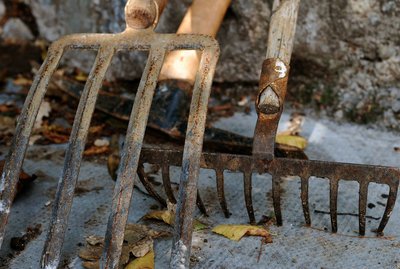 Pregnant Woman Struck by Car
According to Suffolk County Police, a pregnant pedestrian was struck by a car in Melville on Saturday afternoon. Anika Vorndamme-Cajigal was seriously injured after being hit in the parking lot of White Post Farms on Old Country Road.

37-year-old Vorndamme-Cajigal, of Lindenhurst, was standing by her car when she was hit by a 2004 Honda, driven by 79-year-old Edward Henselder of Melville. Henselder said that he was backing out of a parking spot when his foot slipped off the brake pedal and onto the gas, causing him to hit Vorndamme-Cajigal as well as five parked cars.

Vorndamme-Cajigal was taken to Huntington Hospital, where she was treated for two pelvic fractures and other serious injuries. The victim, who is six months pregnant, is in stable condition. Henselder was not injured.

Police are still investigating the crash. The Honda was impounded for a safety check and anyone with details concerning the crash should contact the Second Squad at 631-854-8252.

Man Arrested for Attempted Break-In with Pitchfork
Police arrested 39-year-old Michael Brown of Freeport on Saturday after he allegedly attempted to break down a door of a Roosevelt home using a pitchfork.

The resident was home at the time of the attempted burglary and called police. After responding to the call, police found Brown nearby, riding a bicycle that was reported stolen and in possession of marijuana.

Police say that Brown and the 58-year-old resident of the house know each other. According to a report from CBS News, officials later recovered the pitchfork.

Brown is now facing charges of attempted burglary, unlawful possession of marijuana and criminal possession of stolen property. Brown was scheduled for arraignment on Sunday.