21-year-old Swaneka Danzler of Amityville has been charged with cruelty to animals for dumping two emaciated pitbull puppies outside of the Riverhead Animal Hospital.

Suffolk County Police have identified a suspect they believe responsible for abandoning two pitbull puppies in Riverhead.  One of the emaciated puppies died on Christmas night, and the other was so sick that its skin peeled off when it was picked up, Newsday reported last week. 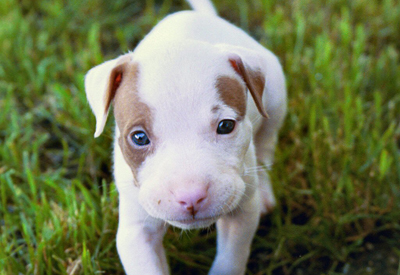 The male dog passed away after being transferred to Mattituck Laurel Veterinary Hospital in Laurel.  The female dog is still recovering at Southold Animal Shelter, according to SPCA chief Roy Gross.
Swaneka Danzler, 21, of Amityville has been charged with cruelty to animals for abandoning the pups.  Danzler told the Society for the Prevention of Cruelty to Animals that she dumped the puppies into a six-foot well near the Riverhead Animal Hospital.
Danzler reportedly dumped the puppies, one male and one female, around 1:00 a.m. on December 18.
The SPCA is asking for donations to help provide medical care for the surviving puppy, who will be available for adoption following its recovery.  Though mange is treatable, it can take months to fully recover.
Share your thoughts on this article by posting a comment below, or by visiting our Long Island Living discussion forum.