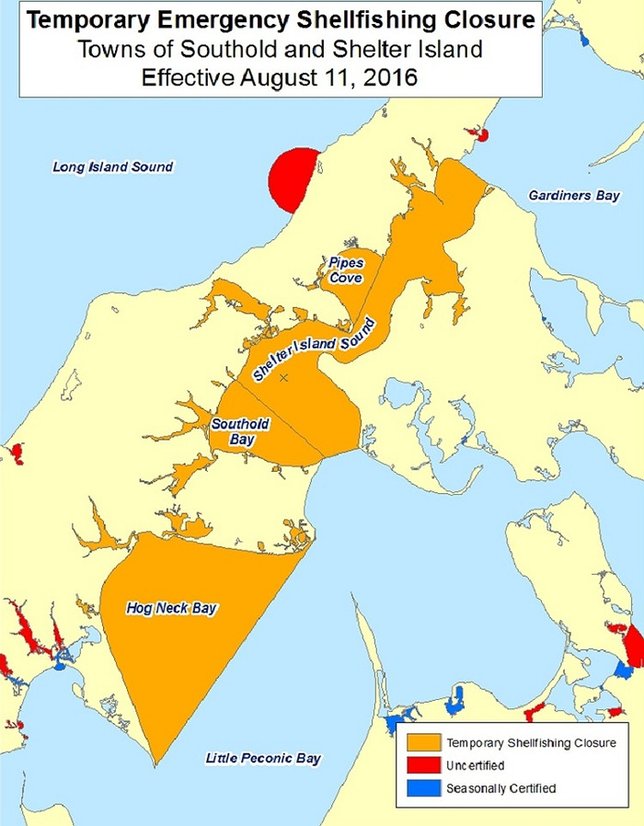 Effective immediately on Thursday, August 11, 2016 and continuing until a determination is made that conditions no longer exist that may make shellfish hazardous for use as food, the following areas are designated as uncertified and the harvest of shellfish is temporarily prohibited.

Additionally, in the Town of Southold, all of Hog Neck Bay and its tributaries, lying north of a line from Nassau Point to Cedar Beach Point, are closed effective immediately.

This action was taken to protect the public health. Stormwater runoff caused by heavy rainfall carries bacteria and other pathogens into adjacent surface waters. When water quality in the enclosed creeks, coves, harbors and bays is adversely affected, shellfish in those areas have an increased potential to be hazardous for use as food.

A recorded message advising harvesters of the status of these shellfish areas may be heard at (631) 444-0480. The message will be updated during the course of the temporary closures. If you would like a more detailed description of the closed areas, please call the office during normal business hours at (631) 444-0492. Additionally, information about temporary shellfish closures will be available on DEC's website.