Governor Andrew M. Cuomo today announced that the state’s multi-agency deployment is continuing to test for Legionella and canvass additional locations in the Bronx. 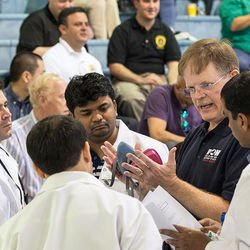 Albany, NY - August 10, 2015 - Governor Andrew M. Cuomo today announced that the state’s multi-agency deployment is continuing to test for Legionella and canvass additional locations in the Bronx. Efforts over the past two days resulted in more than 500 building sites being canvassed. The State Mobile Command Center is open at Hostos Community College to lead the effort, and expanded outreach and testing efforts are taking place throughout the borough. Teams led by the State Department of Health will be focusing on high impact areas and providing information on Legionnaires’ disease to members of the public as well as surveying additional buildings for cooling towers. Teams led by the New York State Office of Emergency Management and the Office of Fire Prevention and Control will be taking samples from cooling tower sites.

"We are taking every precaution to prevent the spread of Legionnaires' Disease," Governor Cuomo said. "This outbreak has been a source of great concern for people throughout the Bronx and the rest of New York City, but residents should know that we are doing everything necessary to protect the public health. The state is working closely with our federal and local partners, and together we will keep New Yorkers safe."

Teams led by the State Department of Health will be canvassing impacted areas in the Bronx, surveying additional buildings for cooling towers and providing information on Legionnaires’ Disease to members of the public at locations throughout the Bronx. Teams will be at 4 Train stops, including the Grand Concourse and 161st Street and River Avenue (Yankee Stadium) Stations and at 5 Train stops, including the 3rd Avenue and 149th Street and Gun Hill Road (Co-op City) Stations.

This effort is continuing to be done in close coordination with the work of the Centers for Disease Control and Prevention and New York City’s Department of Health and Mental Hygiene.

On Thursday, the Governor announced that the state is offering free Legionella testing to building owners, operators, managers and landlords of buildings with cooling towers or evaporative condenser units that can be sources of the bacteria. This testing is being offered free of charge, and two hotlines have been set up to further support the collection of testing samples. Those numbers are 888-769-7243 and 518-485-1159, and are staffed by trained operators Monday through Friday from 8:30am to 4:30pm.

This testing support also helps building owners and operators comply with the recent order from New York City that towers with the potential to become sources of Legionella bacteria be tested before mid-August. Building owners, operators, managers, and landlords who wish to have DOH test for Legionella can also send the name and address to which the kit should be mailed, and a working phone number to:Legionella@health.ny.gov. DOH will send an appropriate sampling kit with simple instructions for sample collection.

The State DOH will provide results of the tests, and when the test shows dangerous levels of Legionella or other bacteria. When tests show dangerous levels of bacteria, the State will work with property owners and managers to facilitate prompt disinfection.