The Fight to Preserve Knoll Farm 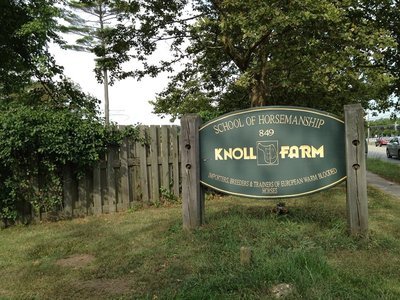 Brentwood's Knoll Farm dates back to 1891. Back then it was the typical farm mainly used for agricultural purposes. It shut down in 1961 and came into prominence six years later when Anne Gibbons, a college student who recently moved to America at the time, realized the property was a good spot to keep a horse. In 1969 Anne married the farm’s owner, David Gibbons, and Knoll Farm became a school for riding horses, training, breeding, and also provided boarding. The farm thrived from that point forward and became the go-to spot for horse shows on Long Island.
The equestrian haven that Knoll Farm once was under the Gibbons has since diminished in the past few years. When Anne and David Gibbons sold Knoll Farm in 2001, the horse riding tradition was supposed to be upheld by Andrea Mercier and her parents. The farm fell under hard times and the Merciers blamed it on the recession.
With Knoll Farm’s recent financial woes, developers are now looking to buy the property and turn it into something more profitable. Suffolk County Legislator Rick Montano has asked the Director of the Division of Real Property Acquisition and Management to assess a price for Knoll Farm and buy it under the Suffolk County Drinking Water Protection Program. On July 25, an Islip Planning Board meeting discussed the fate of the farm. 250 people attended the hearing which lasted until 3 a.m.
If Montano's resolution goes through as planned, the farm, stables, and the luscious land used for prestigious horse shows, won't be converted to 10,000 square feet of retail space and 234 apartments. Developers are calling the land Transit-Oriented Development since the farm is right across from the Brentwood train station and is close to downtown Brentwood.
At the hearing many spoke out against the developer's plans. “Brentwood residents at the public hearing adamantly opposed the construction of such dense development,” Montano said. “They noted this would be out of character for the neighborhood.”
One speaker spoke out against the idea of it being turned into Transit-Oriented Development. "With respect to downtown commercial access, this requires walking a considerable distance (almost one half mile) to reach the downtown Brentwood commercial area", the speaker said. "It requires walking along a busy four lane highway. This is an unpleasant walk made even worse by the car traffic entering and exiting the mammoth LIRR parking lot at the Brentwood station."
This speaker said during the hearing that Knoll Farm was was purposely being mismanaged. It was pointed out that since the Merciers took over there has been no advertisement for Knoll Farm. The speaker claimed the Mercier family has run the farm to the ground so they could receive millions of dollars from a zoning change. A zoning change which would level the legendary horse riding paradise and turn it into a lucrative retail space.
The speaker argued that Knoll Farms could still turn a profit. “There is tremendous potential for Knoll Farm to be a profitable business, as it was in the past. In addition to advertising for new riders and boarders, the farm can offer a wider range of programs. I can give you two concrete examples: A therapeutic riding program and reasonably-priced group lessons would benefit children and adults in and around the Brentwood community. The bottom line is that Knoll Farm can be successful again with new owners and proper management.”
Send your pictures of Knoll Farm to photos@longisland.com.
[Source: Save Knoll Farm Facebook,  Rick Montano]
Photos Courtesy of Thomas Gernon.