Roxanne, a 9 foot long, 600 pound Risso's dolphin, was rescued in June and the Riverhead Foundation is fundraising in order to afford her release. 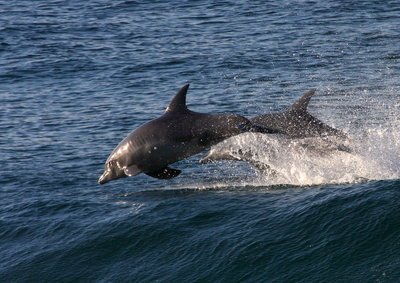 Back in June, a large Risso’s dolphin was found struggling on a sandbar just south of Jones Beach.  Members of the U.S. Coast Guard Fire Island were alerted, and they contacted the Riverhead Foundation for Marine Research and Preservation.

When they arrived, the team from the Riverhead Foundation rescued the 9-foot long adult female Risso’s dolphin, later to be named Roxanne, and brought her to the shore on a stretcher.  She was found to be suffering from dehydration and gastric bleeding, and she was quickly taken to the Long Island Aquarium in Riverhead to be rehabilitated.

Roxanne, who weighs 600 pounds, is now “healthy and thriving,” according to the foundation, and is eating over 75 pounds of squid per day.  She regularly interacts with enrichment devices and staff members, and though she is ready to be released, the expense of releasing her is not yet feasible.

According to a release from the Riverhead Foundation, this past winter was the largest cold-stunning season that they have experienced, and the foundation exhausted a great deal of its funds rescuing sea life like dolphins and turtles.  To release Roxanne, the group would need to afford a team of eighteen animal care members, a crane, a transport truck and a vessel that will carry her offshore.  They are also looking to outfit her with a satellite tracking device so that researchers can learn more about Risso’s dolphins.

"It is our goal to raise as much as we can to support Roxanne and plan for her release in early September," said the press release from the foundation.

The Riverhead Foundation is currently raising money through Razoo, and are looking to raise $35,000 for her release.  Donations can be made on Razoo or mailed to the foundation through the contacts listed on their website.

Until her release, Roxanne can be seen here on a live webcam at the Long Island Aquarium.