The project will address the chronic, perilous flooding that has plagued a stretch of Long Beach Road in South Hempstead for decades. 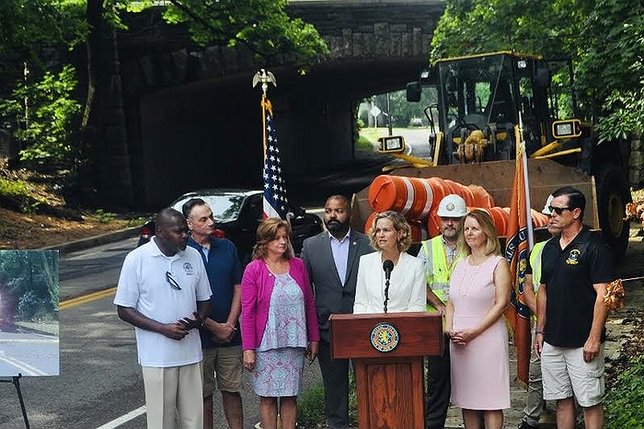 Executive Laura Curran with Legislator Debra Mulé and their colleagues in state and village government.

Nassau County Executive Laura Curran was joined by Nassau County Legislator Debra Mulé (D - Freeport), their colleagues in state and village government, and local civic leaders to mark the the launch of an infrastructure project that will address the chronic, perilous flooding that has plagued a stretch of Long Beach Road in South Hempstead for decades.
“My team has been tackling decades of neglected infrastructure one project after another and our unprecedented progress continued today in South Hempstead,” said County Executive Curran.  “Our residents should never have to navigate flood waters on their way to work, nor should our dedicated volunteer fire departments be making frequent water rescues on our roadways.  I am proud to continue my commitment and get this long-awaited project done for the community.  I want to thank Legislator Mulé and the South Hempstead Civic Association for their continued advocacy.”
Legislator Mulé said these improvements have been her top infrastructure priority since taking office in 2018. By addressing the persistent flooding hazard, she is hopeful that the project will put the South Hempstead Fire Department - an entity that has rescued numerous stranded motorists from floodwaters beneath the Southern State overpass - “out of the water rescue business.”
“Kathy Spatz, who was the president of the South Hempstead Civic Association at the time, took me on a tour of this area and said this problem has been going on for years. I’ve been talking to some of the people - they’re saying that this has been an issue for 60 years,” Legislator Mulé said. “Well, that’s not acceptable - we have to fix it. I’m so pleased and so thankful to the County Executive and her team at DPW for their commitment to making sure that this is something that gets fixed. I want to thank everyone who has pressed for this and continued to advocate for this.”
The project entails the resurfacing of Long Beach Road in South Hempstead from Woodland Drive to approximately 100 feet north of Dietz Street and the installation of 10 leaching basins - each 10 feet deep - to address drainage issues and frequent flooding that occurs beneath the Southern State Parkway overpass. The project also entails milling and filling the pavement north and south of the Southern State overpass and replacing concrete curbs, driveway aprons and pavement along the shoulders.
Work began on Monday, July 26, and is expected to last approximately six weeks (weather permitting).
“This project will help prevent flooding, make our roads safer, and improve quality of life for residents in Hempstead and beyond. I thank Nassau County Executive Laura Curran and the Department of Public Works for their ongoing commitment to keeping our local infrastructure both resilient and efficient,” said New York State Senator Kevin Thomas.
“Following numerous flooding issues and major traffic issues, I was proud to join Nassau County Executive Laura Curran and Legislator Debra Mulé to announce this groundbreaking new drainage project on the border of Hempstead and South Hempstead,” said New York State Assembly Member Judy Griffin.  “I want to thank County Executive Curran and Legislator Debra Mulé for taking action to resolve this critical issue for Nassau County residents.”
“On behalf of the Civic Association, we’d like to thank everyone involved, including County Executive Curran and Legislator Mulé. This has been an ongoing issue for us for many, many years, and it’s nice to be heard and see some action,” said Laura Mallay, Vice-President of the South Hempstead Civic Association.
“Our number one concern at the South Hempstead Fire Department is the safety of the public, and this is definitely going to make it safer for our residents in Hempstead and South Hempstead,” said Thomas Maher, South Hempstead Fire Department Commissioner.