An exhibit on how to get ready for the next massive storm to hit Long Island is presently on display at the Harborfields Public Library. 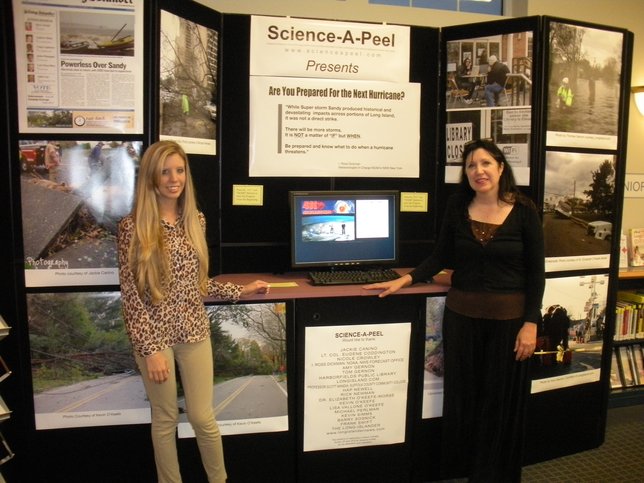 Greenlawn, NY – Harborfields Public Library in hosted a Hurricane Safety seminar to help residents prepare for future storms. New York State Assemblyman Andrew Raia and Steve Kamvakis of the Suffolk County Office of Emergency Management (OEM) spoke to attendees on Long Island’s experience with Super Storm Sandy and the need to be ready for when an actual hurricane next strikes the region (Sandy, for all its devastation, was only a tropical storm when it struck).

Assemblyman Raia has already visited 5 other towns in conjunction with OEM, and will be at similar forums hosted by libraries in Commack (Aug. 5th), East Northport (Aug. 15th), Bay Shore (Aug. 19th) and North Babylon (Aug. 28th). He hopes that the meetings will reinforce lessons learned after Sandy and help residents better prepare for the next major storm.

“I think a lot of people learned some valuable lessons after that last one—even if it’s just the basics about having cash because the ATM machines and all the credit card machines were down,” said Raia. “Whether it be to fill up every car that you have and every gas can that you have, just make sure you’re prepared.”

The discussions aim to spark “talk about different things that really we didn’t think about when it was one every 20-30 years,” he added. “Now my power’s been out 3 weeks two years in a row—with Irene and then again with Sandy. These ‘hundred year storms’ are coming with a lot more frequency.”

Raia said that people often took it for granted that if the power went off it would come back on the next day, and they now need to be ready for extended periods without electricity. After many Long Islanders went without electricity for nearly a month, the assemblyman feels they should prepare for the worst in case another storm cripples the area’s power grid once again. “Now that we have PSEG coming in to change the structure, we’re hoping that has an impact... time will tell.”

The Hurricane Safety seminar also served as launching point for a multimedia, hands-on exhibit which will be on display in the Harborfields Library Reference Room throughout the month of August. Created by Science-A-Peel—a non-profit Greenlawn-based charity dedicated to promoting science—the exhibit displays images taken in the aftermath of Sandy and features an interactive 3D animated video which guides patrons through the nature of hurricanes and how to prepare for them.

Lisa O’Keefe, president of Science-A-Peel, used her decades of experience in broadcast and web design to produce the video, which can be viewed at the library or on NYSHurricanes.com. The video features takes from another Science-A-Peel project, Science Is Appealing—a public access program produced by the organization.

Host Nicole Crowley interviewed Ross Dickman, the meteorologist in charge of NOAA’s National Weather Service in New York, and Scott A. Mandia, Professor of Earth and Space Sciences and Assistant Chair of the Physical Sciences Department at Suffolk County Community College, on subjects ranging from previous hurricanes to what Long Islanders can expect from future storms.

Crowley opens the video by stating that “Long Island is overdue for a category 3 hurricane—a force so strong that it can result in massive power outages, tree and soil loss, homes destroyed, and lives lost.” Unfortunately, according to Mandia, “there really are no evacuation plans to get people off the Island in general.” By the time it is known that hurricane will touchdown on Long Island, officials will have already shut down the bridges, ferries, and tunnels, “you would just have to move inland.”

Dickman warns “that while Super Storm Sandy produced historical and devastating impacts across portions of Long Island it was not a direct hit. There will be more storms. It’s not a matter of if but when.” Were a hurricane to actually hit the Island, the impact could be far worse than what we experienced with Sandy, and residents will need to know how to handle the situation.

“In 1938 nobody had a chance to prepare, kids were still in school” said Crowley on the subject of past hurricane touching down. “It’s good to know what routes to take [home], or when it would be safer to just stay inside.”  O’Keefe added that “the last thing you want is people getting stuck on the roads with nowhere to go.”

Tips on how to survive during and after a massive storm are provided throughout the video, and include storing up plenty of fresh water and having a large amount of nonperishable foods on hand.

The video, like all of Science-A-Peel’s work, is designed to provide an accessible, easy to understand platform for people from all walks of life to gain an education in a scientific field. “Not everybody learns from books,” said O’Keefe, “this provides a way for everyone to learn about science.”

She also hopes that the exhibit fosters a greater understanding of how hurricanes can impact the lives of Long Islanders. “A lot of this material has not presented itself readily to the public, and a lot of people are lacking on basic information” such as the fact that “by the time a hurricane is here, the bridges are closed.”

The exhibit is designed to be mobile, and could move to another library or school after it leaves Harborfields. There will be no charge to host it, as O’Keefe wishes to provide its information to as many people as possible, and Science-A-Peel subsists entirely on donations.