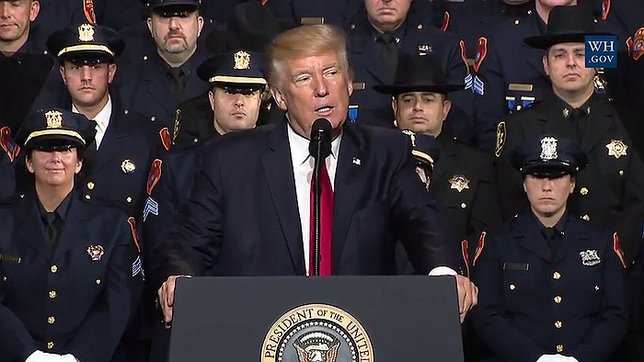 President Donald J. Trump spoke today on the campus of Suffolk County Community College where he addressed the ongoing problem of gang violence on Long Island and the United States.

Brentwood, NY – July 28, 2017 – President Donald J. Trump spoke today on the Brentwood-based Michael J. Grant Campus of Suffolk County Community College in a law enforcement-only event where he addressed the ongoing problem of gang violence – particularly that of MS-13, a mostly Central-American group originally hailing from the streets of Los Angeles – and how he and authorities are winning the fight to eradicate them from the streets of not only Long Island, but the United States in general.
The event was a high-security affair, and saw Trump accompanied by local NY Congressmen Lee Zeldin (R, NY-1) and Peter King (R, NY-2) as he spoke to members of police representing Suffolk, Nassau, Dutchess, and Ulster counties as well as State Police from New York and New Jersey.
“It’s a great day to welcome President Trump back to Long Island,” King said while introducing the Commander-In-Chief of the United States. “Law enforcement has never had a greater advocate in the White House than Donald Trump…he will always be in your corner, and he will always have your back.”
The visit echoed the that of United States Attorney General Jeff Sessions' visit to Central Islip this past April; Sessions also spoke at that time on gang activity and the plans of the Trump Administration to tackle it head-on.
Due to Trump’s controversial and divisive presidency, numerous protests were held at Brentwood Park across the street from the college, with individuals representing civic, political, immigrant, LGBTQ, and other organizations that have taken issue with many of Trump’s stances on hot-button topics, including immigration and health care reform, the President's alleged ties to the Russian government, and – most recently – his Tweeted decree banning transgendered people from serving in the Armed Forces, an announcement that caused uproar amongst civil rights advocates. 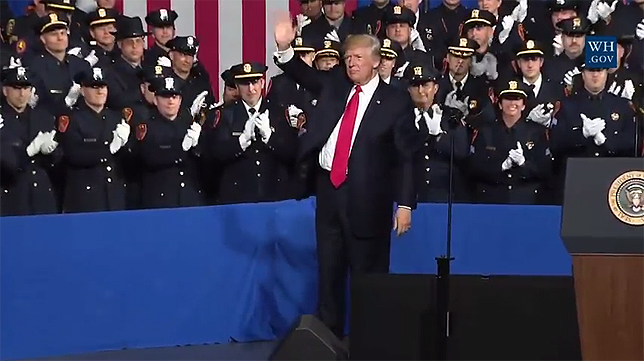 President Donlad J. Trump waving to applauding members of law enforcement after concluding his speech at Suffolk County Community College. Photo Credit: The White House via YouTube.
After striding onto the stage accompanied by “Hail to the Chief,” Trump covered several topics in his approximately 30-minute long speech to the assorted police officers and enforcement agents present, but with one overall theme running throughout: that gang violence in the United States would soon come to a crushing halt, once and for all.
“As you know, I am a big, big believer and admirer of the people in law enforcement. From day one, you have been working hard, and together we're going to restore safety to our streets and peace to our communities and we're going to destroy the vile criminal cartel MS-13 and many other gangs,” he said. “MS-13 is particularly violent…they don't like shooting people because it's too quick, it's too fast. They like to cut them and let him die slowly because that way it's more painful and they enjoy watching that much more.”
Trump also took potshots at the previous Obama Administration in Washington D.C., assuring members of law enforcement on the front lines in the fight against gang activity that that they will finally get the tools and support they need that they weren’t given access to before.
“I want to just tell you all right now that the reason I came today is to say that – on behalf of the American people – I want to say thank you, thank you very much. Thank you for saving American lives every day, and I want you to know that we have your back…believe me, we have your backs 100 percent, not like the old days,” he said. “The MS-13 cartel has spread bloodshed throughout the United States…for many years, they exploited America's borders, lax immigration enforcement, and weak political leadership to bring drugs and violence to cities and towns all across America. Those days are over...we're going to enforce our laws, protect our borders, and support our police like our police have never been supported before.”

Trump took things to a local level, noting that he had spent his youth on Long Island – in an altogether different time where gang violence was nearly unheard of – and decried the recent rash of brutal murders attributed to MS-13 gang members in the area. In the last 18 months, MS-13 has been responsible for 17 murders, according to the Suffolk County Police Department, including the September machete slayings of Breentwood teens Kayla Cuevas and Nisa Mickens.
“I grew up on Long Island, and I didn't know about this…and then all of the sudden this is like a new phenomena. Our hearts and our nation grieve for the victims and their families,” Trump said. “Since January 16th, think of this…MS-13 gang members have brutally murdered 17 beautiful young lives in this area on Long Island alone. They butchered those little girls, they kidnap, they extort, they rape, and they rob. They have transformed peaceful parks and beautiful, quiet neighborhoods into blood-stained killing fields. They’re animals, and we cannot tolerate, as a society, the killing of innocent, young, wonderful vibrant, people…sons and daughters, husbands and wives.”
“We cannot accept this violence one day more...we can't do it, and we're not going to do it because of you,” Trump continued, pointing to the members of law enforcement present in the audience. “You're not going to allow it to happen, and we’re backing you up a hundred percent…remember that, a hundred percent.”
Trump also spoke heavily on one of his trademark campaign policies; that of border security and immigration reform. While running for president, Trump sparked outrage by blaming a large amount of violent crime in American cities and neighborhoods on minorities, especially illegal immigrants from Mexico. At Friday’s address, Trump doubled-down on that approach, touting his infamous Mexico border wall – funds for which are slated to be included in the Federal budget currently being worked on by Congress – and the stepped-up efforts of U.S. Immigration and Customs Enforcement (ICE) agents as major deterrents to more drugs and criminals entering our country.
“We're ending illegal entry into this country, and we will build the wall, that I can tell you. The wall is a vital tool for ending the humanitarian disaster brought on by drug smugglers, gang members, and human traffickers,” he said. “They aren't going through walls, especially the walls that I build…the previous administration enacted an open door for criminals, but we going to build a wall that works and it's going to have a huge impact on the inflow of drugs and crime coming across the border.”
Trump issued a hard ultimatum to MS-13 and their ilk; that the day of reckoning will soon be at hand, and the dedicated men and women of law enforcement agencies – including local police and ICE – will take back America’s besieged communities, one-by-one, until the scourge of crime is no more.
“Against MS-13 we need more resources from Congress and we're getting them…Congress is actually opening up and really doing a great job. Right now we have about 3,000 immigration enforcement agents, but I want Congress to authorize hiring 10,000 more,” he said. “We’re going to dismantle, decimate, and eradicate MS-13 and every other gang, one by one. We’re liberating American towns, yes sir. We will bring justice back to Long Island, we will bring justice back to the United States. We will find you, we will arrest you, we will jail you, and we will deport you.”