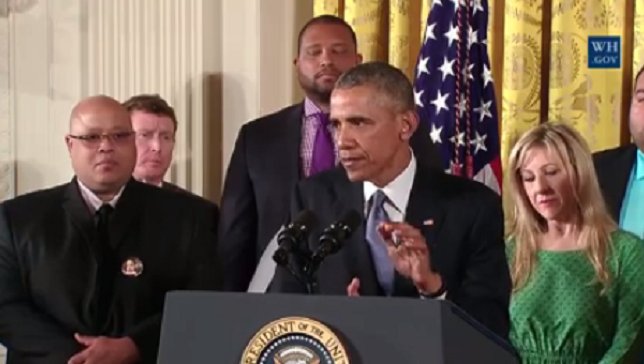 “Three years ago, in the wake of the Sandy Hook shooting, I worked with gun show operators across New York to devise a groundbreaking model for background checks at gun shows. As a result, our state’s gun laws are the strongest in the nation, and yet we have remained the dumping ground for the ‘iron pipeline,’ which funnels guns from states with weaker gun laws to crime scenes in Binghamton, Buffalo, and the Bronx.

I am pleased that President Obama has taken action today to narrow dangerous loopholes in the federal background check system that is used every day for gun sales in all fifty states.

There is a growing consensus, among gun owners and non-gun-owners alike, that we can strengthen our background check system without infringing on the rights of law-abiding Americans. Three years ago, New York showed the way, and now the rest of the country is following it.”

Statements made by others on President Obama's new executive actions to reduce gun violence:

“For too long, the American people have been without sensible gun control at the federal level. Thousands of lives have been cut short and countless families have been forced to bury their loved ones too soon – all due to gun violence. The fact that Congress refuses to act and pass a national law that protects the American people while also respecting their second amendment rights defies common sense.

“New York has led the way on gun control – enacting the toughest laws in the nation after Sandy Hook where 20 children and six adults were tragically murdered. But there is still more we must do together as a nation. For all the progress we have made in New York State on this issue, the lack of federal gun control continues to leave our communities in the line of fire. Congress must pass a strong national gun control bill and follow the President’s lead in putting the safety of America’s families first.”

U.S. Representative Kathleen Rice, a Vice Chair of the House Gun Violence Prevention Task Force said: “I was honored to join gun violence survivors, victims’ family members and advocates at the White House today as President Obama announced new executive actions to reduce gun violence. The President has acted within his authority because Congress repeatedly failed to do anything to address the gun violence epidemic in this country, and these common-sense measures are significant steps toward closing loopholes that allow guns to end up in the hands of people who aren’t legally allowed to have them.

“But it’s still up to Congress to close those loopholes completely and reform gun laws at the federal level. Instead of wasting time attacking the President’s modest, reasonable actions, I hope Republicans will finally tune out the NRA, act responsibly, and work with us to craft bipartisan legislative solutions that can help prevent us from losing 30,000 lives to gun violence each year.”