The Dingo is an armored scout car that would have been found on the beaches of Dunkirk during the retreat of 1940 and helping liberate the Nazi death camps in 1945. 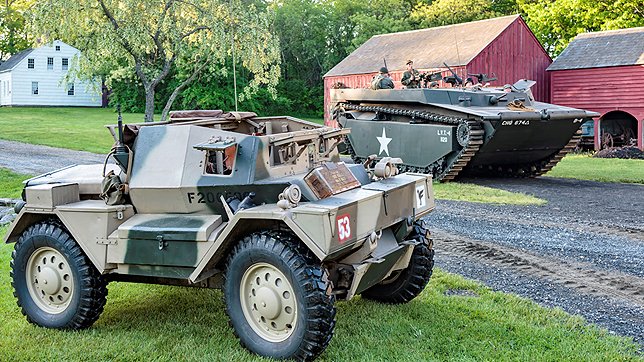 British World War II armor legend the Dingo will be in display at the Museum of American Armor in Old Bethpage, NY.

Old Bethpage, NY - July 25, 2017 - The Museum of American Armor, located inside Old Bethpage Village Restoration, 1303 Round Swamp Road, Old Bethpage, is now home to a British World War II armor legend, the Dingo, an armored scout car that would have been found on the beaches of Dunkirk during the retreat of 1940 and helping liberate the Nazi death camps in 1945.
“Of modest size, the Dingo was fast, reliable and literally served the British from the beginning of World War II to the end of that conflict. It was deployed in all theaters of the conflict, from the Libyan desert fighting Rommel to the British reconnaissance units that came upon the infamous Bergen-Belsen concentration camp as the Nazi Third Reich was collapsing. As a further measure of its design, the Dingo continued to serve the British Army until 1952 and the armies of Portugal and Cyprus into the 1970s,” explained museum director Mark Renton.
The Dingo is one of the vehicles found in the background of the current movie “Dunkirk.” Several hundred of these scout cars were left throughout France as the British were forced to abandon all their equipment while being rescued by a flotilla of Royal Navy ships and private vessels following German victories.
The Dingo had 4-wheel drive for reliable off-road travel and also 4-wheel steering, giving the compact scout car an incredibly tight turning radius of less than 25 feet. The Daimler 6-cylinder engine could power the Dingo to over 50 MPH, yet combined with a sizable fuel tank, was economical enough to give the car a range of about 200 miles. Its two man crew, a driver and a radio operator/gunner, was protected by relatively light armor, but capable of stopping most enemy pistol and rifle rounds. The museum’s Dingo also carries a replica .303 caliber Bren Gun used by the British.
Museum associate board member Eileen Daly Sapraicone explained, “The ability to create an Allied armored column that replicates the sights and sounds of World War II is one of the most compelling educational tools we have to recount the story of democracy’s courage, valor and sacrifice. Place it in this setting of Old Bethpage Village Restoration during special weekends when an environment so reminiscent of the WWII era countryside, and you have created a virtual time machine that ensures indelible memories for entire families.”
The Museum of American Armor is open Wednesday through Sunday between 10:00 a.m. and 4:00 p.m., admission is $12 for adults, $7 for children (5-12), seniors (60+) veterans, the physically challenged, and volunteer firefighters with ID.