Governor Cuomo announced a groundbreaking new proposal that would implement the nation’s strongest mandate for the purchase of American-made products by state entities. 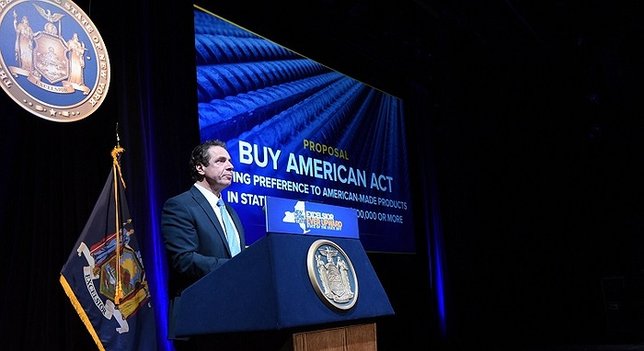 Albany, NY - January 11, 2017 - Governor Andrew M. Cuomo today announced a groundbreaking new proposal that would implement the nation’s strongest mandate for the purchase of American-made products by state entities. Under the Governor’s “Buy American” plan, all state entities will be required to give preference to American-made goods and products in any new procurements more than $100,000. While other similar, less comprehensive policies exist throughout country, this proposal demonstrates the strongest commitment to growing the manufacturing sector, and supporting the men and women who work in it, nationwide.

“Nowhere on Earth can you find another workforce that rivals the skill, quality and dedication of American labor,” Governor Cuomo said. “It’s time that our nation recommit itself to these hardworking men and women and New York is prepared to lead the way forward. When we Buy American, we not only keep our companies and our employees where they belong, but we foster growth and development in leading industries right here at home. This initiative will reinvest in the talent that made this state and this country what it is today and strengthen our role as a global leader in manufacturing for years to come.”

Each year, New York State spends billions of dollars on the procurement of goods and services. However, existing regulations place little emphasis on ensuring this spending power is leveraged to support all American manufacturing, many which are right here in New York State. In fact, only procurements of structural steel, reinforcing steel and other major steel on construction contracts greater than $100,000 are subject to existing “Buy American” provisions. With manufacturing representing one in every nine Upstate jobs and over 5 percent of the state’s total workforce, as well as close to $70 billion in goods being manufactured here each year, New York has been missing a critical opportunity to strengthen a key industry sector.

Governor Cuomo’s proposal seizes on this opportunity by placing an enhanced focus on growing American manufacturing and support its workers through a number of legislative remedies to the state’s procurement laws. These include:

To qualify as “American-made” under Governor Cuomo’s proposal, end manufacturing processes should take place in the United States and more than sixty percent of the components of the manufactured good should be of domestic origin. Exceptions to this requirement include:

o an immediate or emergency need existing for the item or service; or
o a need to protect the health, safety, or welfare of the public