MTA New York City Transit and the New York Transit Museum are putting extra magic on the tracks with the Metropolitan Transportation Authority’s annual holiday tradition of rides to the past via its vintage fleet ... 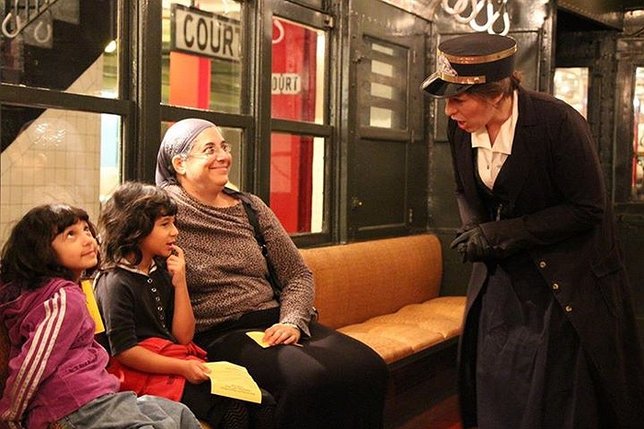 Go see and experience the vintage fleet of buses and subway trains this December.

New York, NY - November 25, 2015 - MTA New York City Transit and the New York Transit Museum are putting extra magic on the tracks with the Metropolitan Transportation Authority’s annual holiday tradition of rides to the past via its vintage fleet of buses and subway trains – and the chance for transit fans to buy museum merchandise at a special station pop-up shop.

The holiday nostalgia fleet includes subway cars from the 1930s and buses from the late 1940s to the 1980s. The New York Transit Museum typically displays these vehicles during special events at the museum or around the city, but are offering these holiday nostalgia rides to the public for a limited time with the swipe of a MetroCard. Some vintage buses also will be on display at Union Square, Herald Square and at the Circle Line Terminal.

For four consecutive Sundays in December, subway customers can catch the “Shoppers Special,” a train consisting of eight cars from the 1930s that ran along the lettered lines until the late 1970s. The cars, which were ordered for the Independent Subway System (IND), were the first subway cars to be identified by their contract numbers, hence the R1/9 designations. R1/9 cars, known as ““City-Cars,” have rattan seats, ceiling fans, incandescent light bulbs, and roll signs for passenger information. Their design of more doors that were also wider and faster, plus increased standing capacity to accommodate crowds, served as the model of modern subway cars, and their dimensions are identical to the latest R160 cars. They were retired from service in 1977.

“For all intents and purposes, this was the first modern subway car and today’s subway fleets owe a lot to the design,” said Joe Leader, Senior Vice President of Subways. “They were basic, durable and offered the expected levels of customer comfort for decades after they were introduced into service. We continue to build upon this strong foundation with each new car design.”

The “Shoppers Special” will run from 10 a.m. to 5 p.m. on December 6, 13, 20, and 27, making local stops on the 6 Av Line from Queens Plaza to 2 Av. The first run of the day departs from 2 Av, where a special museum pop-up shop will be open every Sunday during the holiday nostalgia rides.

MTA NYC Transit is also putting a fleet of vintage buses on the M42 route for weekday daytime service between November 30 and December 18. The buses, which will operate between 9 a.m. and 5 p.m., will only be available weather permitting. The vintage fleet will not operate in rainy, snowy or icy conditions.

“Seeing these vintage buses in service again is always a nostalgic event for many New Yorkers. My father and I drove some of these buses, which makes this an especially personal event for me,” said Darryl Irick, President of MTA Bus Company and Senior Vice President New York City Transit Department of Buses. “Each holiday season we offer a look back into the past with a holiday ride across 42nd Street.”

Subway Car No. 100: Manufactured by American Car & Foundry, this R1-type car was the first car in the initial order of 300 placed in service for the opening of the IND subway.

Subway Car No. 484: Part of a 500-car order of R4 cars manufactured by American Car & Foundry. In 1946, this car received a retrofit of bulls-eye lighting and a public address system.

Subway Car No. 1575: Originally manufactured as an R7, this car was sent to the American Car & Foundry factory and rebuilt as prototype of the next generation R10 subway car.

Subway Car No. 6095: In 1925, the Brooklyn-Manhattan Transit Corporation (BMT) introduced a three-car articulated unit called the D-Type Triplex. The design meant passengers could walk from one car to another in the unit through an enclosed passageway. They carried more passengers and had fewer moving parts, making them efficient and easier to maintain.

Bus No. 2969: Manufactured by General Motors, this model TDH 5101 was specifically designed in 1949 for New York City. It features a double-width front door to expedite the loading and unloading of customers. This bus is known as the Jackie Gleason bus, as it is similar in style to the bus operated by Gleason’s character, Ralph Kramden, on the television show “The Honeymooners.”

Bus No. 3100: Manufactured by General Motors in 1956, this model TDH 5106 was the first air-conditioned transit bus to operate in New York City. It had push-type rear exit doors, wrap-around rear soft seating, fluorescent lighting, and the air-ride suspension that is the standard on modern transit buses.

Bus No. 6259: Manufactured by Mack Truck and Bus Company, model C49DT arrived to the fleet in 1956 and was in operation until 1969 in Staten Island and Brooklyn routes. The “DT’ in the model number stands for “Diesel Transit.” This model was delivered with cushioned seating but converted to hard plastic in the 1960s because of vandalism.

Bus No. 9098: Manufactured by General Motors, this model TDH 5106 introduced the two-tone green color scheme of this era’s standard and was the first New York City bus equipped with sliding windows. These buses were the last order of “Old Look” style buses from GM for New York City Transit.