Tobacco use remains the single largest preventable cause of disease and premature death in the world. The American Cancer Society’s Great American Smokeout, held annually on the third Thursday of November, is a day when ... 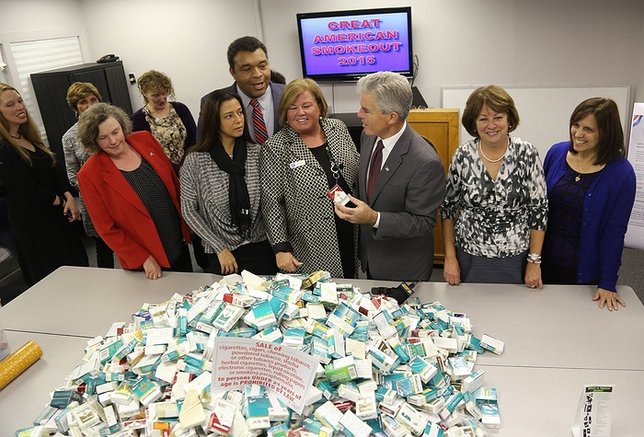 The Great American Smokeout Day is part of Suffolk County's continuous efforts to combat one of the leading public health threats in the nation.

Hauppauge, NY - November 19, 2015 - Today,  I was joined by Legislators William Spencer and Monica Martinez, Dr. James Tomarken, Commissioner of the Suffolk County Department of Health and the American Cancer Society of Long Island, to celebrate the 40th anniversary of the Great American Smokeout.

Tobacco use remains the single largest preventable cause of disease and premature death in the world.  The American Cancer Society’s Great American Smokeout,  held annually on the third Thursday of November, is a day when smokers are encouraged to quit for the day and make a plan to quit for good.

“Suffolk County has been a trailblazer in promoting the health and well-being of its residents and nowhere is that more evident than in our tobacco control efforts,” stated County Executive Steve Bellone.  “Not only are our clean indoor air laws among the strictest in the nation, Suffolk County was one of the first municipalities in the nation to ban the sale of tobacco to those under the age of 19 in 2005 and age 21 this past year.”

Increased awareness, research, and other efforts have assisted in the dramatic decrease in smoking rates over the past several decades, from about 42% of adults in 1965 to about 18% in 2013, the latest year for which numbers are available. Still, about 42 million adults currently smoke cigarettes, and tobacco remains a major killer, responsible for nearly one in five deaths in the United States, and at least 30% of all cancer deaths.

Through Suffolk County’s cessation programs, education and awareness initiatives, over 17,000 residents have been served and since 2001 Suffolk County’s smoking rate has decreased from 24% of the population to 14% with 5% of those reporting that they do not smoke every day.

Under the New York State Adolescent Tobacco Use Prevention Act (ATUPA) Suffolk County is required to make compliance checks with minors at all businesses registered to sell tobacco which total over 1,400 businesses throughout the County.  Suffolk County tobacco retailers currently boast a 96 percent compliance rate, up from 84 percent in the year 2000.

“Though both the nation and Suffolk County have made tremendous progress over the years in reducing the use of tobacco, we have more work to do,” said Dr. Tomarken. “We urge Suffolk County residents who have resolved to quit smoking to sign up for one of our cessation classes. It is there that they will get the help and support they need to increase their odds of being successful.”

“Some people are able to quit on their own, without the help of others or the use of medicines,” said Cathleen Garry-Community Executive  for the American Cancer Society. “For many, it can be extremely hard to break not only the physical addiction, but also the social and emotional ties to smoking. The most important step is the first one: making the decision to quit, and we hope the Great American Smokeout gives smokers an opportunity to consider making a lifesaving change.”

2001: Banned the distribution of free tobacco products to county residents.

2002: Banned smoking within 50 feet of street- level entrances to hospitals and county buildings. In 2006 the ban was strengthened to include all entrances.

2005: Banned the sale of tobacco to individuals under the age of 19.

2009: Banned the use of electronic cigarettes in places where smoking is banned and prohibited the sale of e-cigarettes to individuals under the age of 19. (Most e-cigarettes contain nicotine, an addictive drug found in the tobacco plant.)

2015: Banned the sale of tobacco, tobacco products, e-cigarettes and liquid nicotine to individuals under the age of 21.