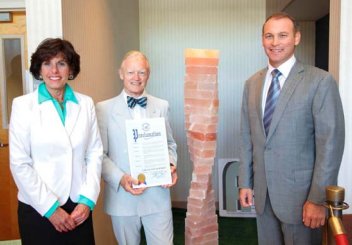 July 1st, 2013 - Huntington, NY - Suffolk County Legislator Steve Stern (D-Huntington) 16th LD, presented a Proclamation to Dix Hills artist Chuck von Schmidt, whose sculpture “Don’t Look Back-Lot’s Wife” is on display at the William Rogers Legislature Building. Chuck von Schmidt’s work has been exhibited around the world and his most famous piece, “The Ideals of Aaron,” a pair of crystal hands holding a globe, was personally presented to Pope John Paul II in recognition of the Pope’s accomplishments in furthering relations between Catholics and the world’s other religions.

The “Art in the Alcove” program was created by Legislator Lynne Nowick in 2009 to showcase local artists. Chuck von Schmidt’s work, created from 300 pounds of Himalayan Sea Salt, will be on display through July 31, 2013. “It is my pleasure to recognize Chuck von Schmidt’s work and congratulate him for his participation in the Suffolk County Legislature’s “Art in the Alcove Program,” Legislator Stern said. The arts are a very important part of our life in Suffolk County and I encourage residents to come view Mr. von Schmidt’s work and visit his website www.von-schmidt.com.”