In association with America Legion, Cub Pack 7, and Garden City Volunteer Fire Department over 200 American flags were properly and respectfully retired in a new annual event at the Tanners Pond Environmental Center. 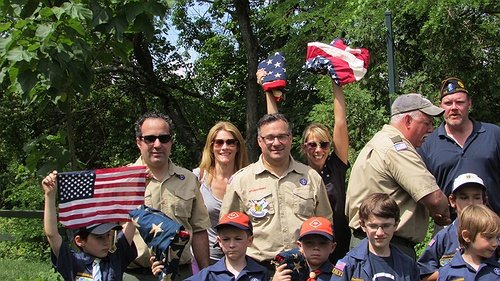 Garden City, NY - June 25, 2015 - On June 13, the American Legion, Garden City Volunteer Fire Department, Cub Pack 7, and representatives of the Garden City Bird Sanctuary conducted a poignant and memorable service at the Tanners Pond Environmental Center to formally retire nearly 200 American flags that had served their purpose.  Last January, Rob Alvey - the Founder and President Emeritus of the Garden City Bird Sanctuary attended a men's breakfast sponsored by the Garden City Community Church and began talking with veteran Chris Blume.  Chris coordinates worn out flag collection, including a collection box at the Garden City Public Library and inquired about donating a tree at the community's nature center with the possibility of burying ashes from the retired flags as a fitting place of honor.  Joanne Kastalek, a GCBS Director as well as Garden City Library employee, helped Rob coordinate contacts with the veterans.

One thing lead to another and "Woodmen Life", a national benevolent organization that supports scouts and flag distribution agreed to fund a memorial garden, bench and flagpole in celebration of the 125th anniversary of their organization.  Their mission is to foster fraternalism through family, civic, charitable, and patriotic activities. Woodmen volunteers helped clear and plant the area, with additional assistance under the Serve With Liberty volunteers from Liberty Mutual Insurance, Girl Scout Troop 1006, York College geology club students, and local residents.

Saturday June 13 was part of Flag Day weekend, and families from Garden City Cub Pack 7 and veterans came to the site, carefully folding each worn flag and setting up a secure fire pit.  Overseeing this were volunteers from Garden City's Volunteer Fire Department with the new "brush-truck" on hand as a precaution. The brush truck is a new and innovative mobile vehicle that is extremely versatile and can maneuver easily on rough terrain. It has already seen service on brush fires north of the Village, and at golf courses.  There were many veterans on hand, noting the previous Saturday was the anniversary of D-day and the tremendous sacrifices so many of young men and women made.

Starting with an invocation and taps, scouts stepped forward with a flag. The service included acknowledgement that the flag had completed its service, but was worn out and no longer fit.  One by one, the flags were retired- with honor and respect.  A hole was then dug by the new flagpole and ashes buried with a final salute.

If you have never witnessed this service, it is meaningful and heartfelt..and not something that can be forgotten.  It is also a reminder of the responsibilities all people have as Americans to ensure a sustainable future rather than simply enjoying the privilege of "freedom".   Nearly 200 flags were retired in the service. An additional 100 were retained with a request to hold another service in 2016, and to continue the program of collecting worn out flags at the Garden City Library.  This will be scheduled, and the community will be invited again next year.