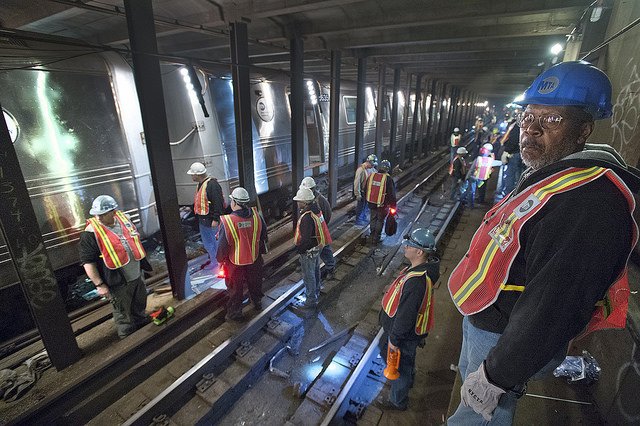 New York, NY - May 3, 2014 - The Metropolitan Transportation Authority expects to restore local E F service along the Queens Boulevard line at approximately 1 p.m. following a train derailment near 65 St on Friday and overnight service suspension for repairs. Express service in both directions on the lines remains suspended.

Work to repair tracks will extend into early Monday with the goal of restoring full normal service on all four affected lines in time for the morning commute. Local service on the E F will be suspended at 10 p.m. Saturday until approximately 10 a.m. Sunday to remove the remaining cars and to complete repairs on significant stretches of track. Shuttle buses will be provided for overnight customers along the Queens Boulevard line.

R trains are running between Whitehall St and 57 St-7 Av in Manhattan. Weekend construction work on the M 7 J lines has been canceled.

Please allow for additional travel time on the affected subway lines and higher volume of customers on the LIRR.

MTA New York City Transit is investigating the cause of the derailment. The section of rail in question is stamped with markings indicating it was manufactured in the United States in November 2013, and a preliminary canvass of maintenance records shows it was installed in March 2014. The rail will be sent for metallurgical testing as part of the investigation.

MTA NYCT has an aggressive program to fix and prevent broken rails along its 660 miles of mainline track. Track workers walk every inch of the subway system twice a week looking for flaws, and specialized rail cars scan the rails to find hidden flaws every other month. While every rail system experiences occasional rail breaks, the MTA’s continuous goal is to reduce them as much as possible.

The results of this effort are clear: The New York City subway system, which carries 1.7 billion customers per year and runs 8,000 trains each weekday, has experienced only 17 mainline derailments in the last decade.

Federal Transit Administration figures show that while the MTA’s subway system is far larger than any other in the United States, in most years its derailment rate is less than half the national average. This record is impressive, and the MTA’s goal is to reduce that number to zero.

As part of that effort, the MTA maps the location of broken rails and other rail defects to identify where a large-scale replacement project would have the greatest impact. The results were presented in February to the MTA Board’s Capital Program Oversight Committee.

They showed five corridors, including the E F M R line through Queens where Friday’s derailment occurred, where the largest number of breaks occurred. The MTA has developed plans to install 23 miles of continuous welded rail in those sections to reduce breaks, improve track conditions and reduce noise and vibration levels.

The MTA has a safe subway system, and is using sophisticated data analysis and the capital planning process to make its rails even safer.

The most up-to-date information on MTA service status is always available at www.mta.info. For immediate notice of service changes, sign up for email or text alerts at www.mymtaalerts.com. For weekend subway service changes, visitwww.mta.info/weekender.