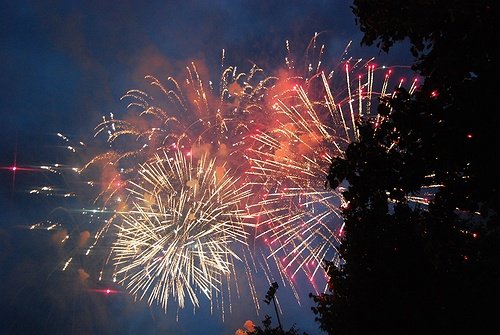 Update - June 26, 2015 - Due to an impending storm, Nassau County and TD Bank, America’s Most Convenient Bank®, have postponed this Saturday’s spectacular fireworks show and concert in Eisenhower Park to Monday, June 29, 2015. A Doo Wop Concert will begin at 7:00 p.m. at Lakeside Theatre, followed by the fireworks display at approximately 9:00 p.m.

There is no formal seating; visitors should bring blankets or chairs. Space is limited and overflow will be directed to other viewing and parking areas.

TD Bank will once again sponsor “Celebrate America” at the Harry Chapin Lakeside Theatre in Eisenhower Park. The fireworks, presented by the world-famous Grucci family, are part of an unforgettable night in Eisenhower Park which kicks off with a performance by Batman’s Third Rail Band, followed by Killer Joe and the Lido Soul Revue.

“I thank TD Bank for continuing to support this spectacular Independence Day celebration,” said Mangano. “The annual Fireworks Show and Concert here in beautiful Eisenhower Park is a great opportunity for our residents to come out and enjoy an incredible fireworks show and performances by Batman’s Third Rail Band, and Killer Joe and the Lido Soul Revue.”

The theatre area gates will open at 5:30 p.m. and the fireworks will begin at nightfall (approx. 9:30 p.m.). Tickets are required for admission to the Theatre area and are available beginning June 14th free of charge, at any TD Bank on Long Island, while supplies last. There is no formal seating; visitors should bring blankets or chairs. Space is limited and overflow will be directed to other viewing and parking areas.

“TD is excited to sponsor and support 'Celebrate America' for the 12th consecutive year,” said Ed Blaskey, Market President, TD Bank. “Residents of all ages have been looking forward to this vibrant and entertaining night since last year's event. We cannot wait to see what the Grucci family has in store for the 2015 celebration!”

In anticipation of Independence Day, County Executive Mangano and Acting Police Commissioner Thomas Krumpter remind residents that fireworks awareness and prevention are important issues to discuss with their families. The possession, use, or sale of fireworks, including sparklers, is a violation of New York State Penal Law, and may be punishable as a misdemeanor or a felony. Parents should talk with their children about the destructive outcomes that can occur from playing with fireworks.

Fourth of July fireworks, although popular, can be extremely harmful. Fireworks statistics indicate that:
• An estimated 9,600 people were treated in emergency rooms for fireworks-related injuries in the United States, in 2011.
• Approximately 16% of all consumer fireworks injuries are caused by sparklers burning hands and legs, with the majority of these injuries occurring to young children.
• Most of these injuries happen at the victims’ homes.
• Fireworks can cause life threatening residential fires.
• Children ages 5 to 9 years old have the highest rate of injuries related to fireworks.

There are many licensed professionals that perform fireworks presentations for the public, such as the “Celebrate America” show at Eisenhower Park. County Executive Mangano and Acting Police Commissioner Krumpter would like to wish the residents of Nassau County a happy and safe July 4th holiday.

About the Harry Chapin Lakeside Theatre:
The Harry Chapin Lakeside Theatre is an outdoor theatre located near parking fields 6 and 6A in Eisenhower Park. Special accommodations are available for disabled patrons, including reserved parking, easily accessible restrooms, and a convenient reserved location on the hill. Assistive hearing devices are available for the hearing impaired. There is no formal seating at Lakeside Theatre, so concertgoers are urged to bring folding chairs. If weather conditions are doubtful, call (516) 572-0355 after 7:00 p.m. for updated performance information.