Mangano Partners With Jericho Teen To Provide “Hoodies For The Homeless” 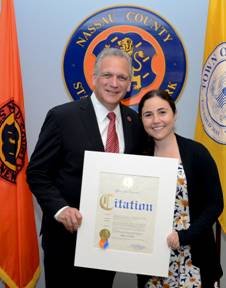 Jericho, NY - October, 16 2014 - Nassau County Executive Edward P. Mangano recently partnered with 15 year old Jericho High School student Tylar Trichon to provide “Hoodies for the Homeless.” County Executive Mangano honored Ms. Trichon for her charitable initiative and offered assistance by providing Hoodie drop off locations throughout the County. The idea for Tylar’s “Hoodies for the Homeless” came to Ms. Trichon one afternoon while she was cleaning out her closet and saw the many hoodies she no longer wore that were perfectly fine but taking up space. She realized then that there were thousands of other Long Islanders with over-stuffed closets while hundreds of other Long Islanders could use some help.

The Following Drop off Locations are Open from 9am to 4:45pm, Now through October 31st: