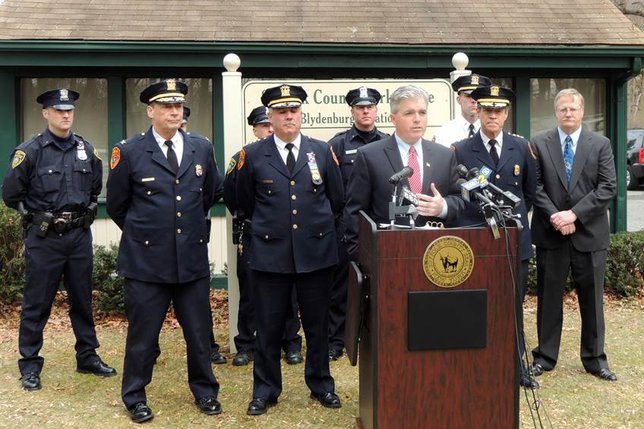 Suffolk County, NY - June 21st, 2014 - County Executive Steve Bellone commended Suffolk County’s New York State delegation on approving a plan to reclassify Suffolk County Park Police Officers as Suffolk County Police Officers to improve public safety, make government more efficient and save Suffolk County more than $10 million over the next 5 years.
“This is a commonsense initiative that will make our government more efficient and save millions of taxpayer dollars,” said County Executive Steve Bellone.  “This will allow us to better meet the seasonal needs for security in our parks and cut down on overtime.  I want to thank Senator LaValle, Assemblyman Englebright and our entire state delegation for approving this transfer which will save millions of dollars for Suffolk County taxpayers.”
The state legislation, which passed both houses with overwhelming bipartisan support (121-16 Assembly, 55-0 Senate), was sponsored by Senator Ken LaValle and Assemblyman Steve Englebright.
“I am pleased that we were able to secure passage of this important legislation that will help the County meet their financial goals, while ensuring the continued safety of our parks,” stated Senator Ken LaValle.
“It is appropriate to increase the role of law enforcement in protecting Suffolk’s single most valuable asset,” said Assemblyman Steve Englebright.  “Much more needs to be accomplished as we redefine the stewardship needs of the nation’s largest county parks system, and I look forward to continuing to work with County Executive Bellone as we move forward to reorganize oversight to both enhance protection and usage of our valuable parks system and provide staffing flexibility that will enable critical cost savings to Suffolk County residents.”
Due to the seasonality of the Park Police’s workload and the need to provide 24/7 coverage, Suffolk County Park Police experience a disproportionally large amount of overtime. The 2014 Adopted Budget proposed the transfer of current Park Police Officers to the Suffolk County Police Department and included provisions to hire seasonal, temporary and part-time park rangers and park security guards to provide more hours of service and improve coverage while eliminating overtime costs.
Bellone is also interested in looking into how the Park Ranger program can incorporate elements of New York City’s Urban Park Rangers program where the rangers not only have peace officer power, but are also focused on public outreach and education, including interpretive tours.
On March 18, the Suffolk County Legislature voted unanimously in support of a Home Rule message to allow for the transfer to occur.
The independent Suffolk County Legislative Budget Review Office estimated that the transfer of Park Police to the Suffolk County Police Department would save taxpayers $13.4 million through 2018.  The transfer will also put more cops on the street sooner because Park Police have already completed academy training.
Pictured: ounty Executive Bellone joined by Chief Jim Burke and SCPD and Suffolk County Parks Commissioner Greg Dawson.