The Nassau County Public Information Office reports the details of an arrest of a Hempstead man for multiple knife point Robberies. 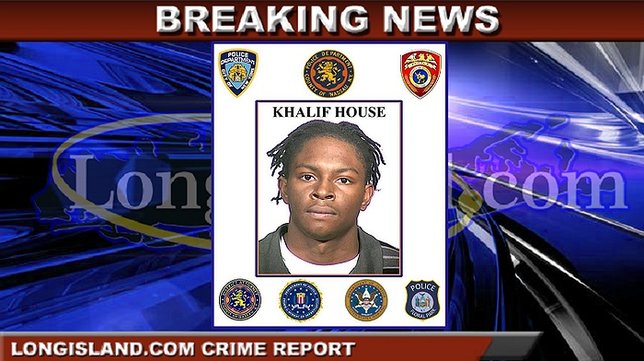 Khalif House, 24, with a last known address in Hempstead, was arrested in connection to multiple knife point robberies that have occurred in Nassau, Suffolk, and Queens counties.

Update - June 9, 2016 - The defendant, Khalif House was charged with Title 18, United States Code, Section 1951, Interference with Commerce by Threats or Violence. He is currently remanded to the Nassau County Correctional Facility.

Co-defendant, Lisette Veltri, 23, of Valley Stream, was arraigned on 06/08/09 at U.S. District Court in Central Islip and was also charged under the same U.S. Code. She was released on bond.

Floral Park, NY - June 8, 2016 - The Nassau County Public Information Office reports the details of an arrest of a Hempstead man for multiple knife point Robberies that occurred throughout Nassau, Suffolk, and Queens Counties.

According to police, a call for a suspicious person in a home on Jericho Turnpike in Floral Park was received by Floral Park Police. Nassau County police along with Floral Park and New York City Police responded to the area in search of the suspect. During the investigation it was determined the suspect may be the same individual involved in multiple robberies including an attempt that had occurred on Tuesday, June 7, 2016 in Queens.

After an extensive search by numerous officers from multiple departments the subject was located at 11:13 a.m.  in the parking lot of 8 South Tyson Avenue and placed under arrest . He has been identified as Khalif House, 24 with a last known address in Hempstead. The investigation is continuing and charges are pending at this time.