Monroe College, a national leader in urban and international education, today announced that culinary arts student Rossella Cangialosi has been chosen to compete in the American Culinary Federation’s (ACF) National Student Chef of the Year ... 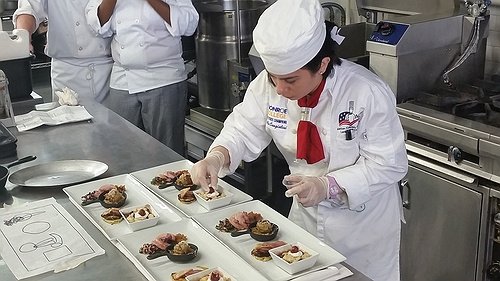 New Rochelle, NY - May 18, 2015 - Monroe College, a national leader in urban and international education, today announced that culinary arts student Rossella Cangialosi has been chosen to compete in the American Culinary Federation’s (ACF) National Student Chef of the Year Competition, held in Orlando on August 1-2.

Ms. Cangialosi, just one of five students participating in the competition, was chosen by ACF National President Chef Thomas J. Macrina as a “wild card” candidate: a student who had not competed in the regional championships typically required for entrance, but whom he felt was deserving of the opportunity. She will be competing against Northeast Regional winner Kathryn Eurich (SUNY, NY), Southeast Regional winner Elxis Dodson (The Art Institute of Jacksonville, Florida), Central Regional winner Diamond Taylor (Joliet Junior College, Illinois) and Western Regional winner Madeline Bauer (Oregon Coast Culinary Institute).

A graduating senior, Ms. Cangialosi is a three-time member of Monroe’s culinary competition team and recently served as the team captain during ACF’s Spring Culinary Classic in Schenectady, helping them bring home 12 medals. She came to Monroe from Barry Tech BOCES on Long Island and earned her first professional medal last year during an ACF-sanctioned competition in Delhi, New York.

“We are so grateful that President Chef Macrina has taken notice of Rossella’s exemplary culinary skills and performance,” said Frank C. Costantino EdD CEC CCE AAC, Dean of Monroe College’s School of Hospitality Management and the Culinary Arts. “Rossella has been an invaluable addition to our culinary team during these past four years and, more importantly, a model student who is graduating with a 4.0 GPA.”

Dean Costantino has coached Ms. Cangialosi since she was a junior in high school and will be working with her in training camp this summer to help prepare her for the national championship.

The Student Chef of the Year Competition, held at the Orlando World Center Marriott in Florida, will require students to prepare four portions of a finished entrée plate based on a whole duck. Competitors will have one hour to fabricate and cook their meal, and 10 minutes to plate the total four portions of their chosen course. Students will be judged on organization, skill, over all work habits, doneness of the dishes and flavor by a panel of distinguished chefs who will serve as both kitchen and tasting judges. The winner will be announced at the President’s Grand Ball during the ACF’s national convention.

Founded in 2003, Monroe College's Culinary Arts program prepares students for professional careers in the culinary field. Taught by a faculty of experienced industry professionals, many of whom are certified by the American Culinary Federation, students gain valuable instruction and mentoring in a real-world culinary environment. Since 2009, the program has received over 580 awards, including more than 25 medals at the state level and the coveted Marc Sarrazin trophy at the International Hotel, Motel and Restaurant Show in NYC in 2011, 2013 and 2014. Last year, Rossella’s team won the ACF 2015 New York State Championship culinary competition. For more information on the school, please visit here.

About Monroe College
Founded in 1933, New York-based Monroe College is a nationally ranked private institution of higher learning with a real world learning approach that prioritizes hands-on academic experiences, practical and relevant academic programs, flexible learning schedules, best-in-class instructional technologies, and committed and engaged faculty to ensure that students are well positioned for career success upon graduation. Monroe is among the leading higher education institutions in the country for graduating minority students.

Monroe College offers Certificate, Associate, Bachelor's, and Master's degree programs. It has campuses in the Bronx, New Rochelle, as well as in the Caribbean nation of St. Lucia, with programs offered through its Schools of Criminal Justice, Information Technology, Nursing, Education, Business & Accounting, Hospitality Management and Culinary Arts, and Allied Health Professions, as well as through its liberal arts and continuing education programs, and its King Graduate School. For more information and admissions criteria, please click here